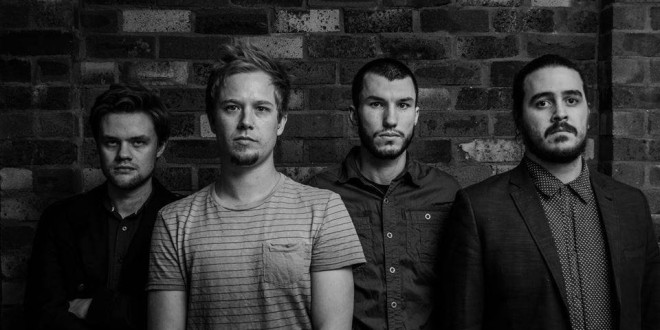 Australian progressive rockers Forecast Tomorrow have been shaking Sydney’s independent music scene since 2009. Each member has a solid credibility and distinction that firmly establishes the quartet’s identity. Founder Ryan “Fizz” Fitz-Henry integrates vapory reverb pads to enhance his piercing chord arrangements. Added to the mix is the precise rhythm bed of Ryan Pracy and Nick Hall (bass and drums, respectively). To cap this combinative force, vocalist Stephen “Rosie” Rosenbladh paces the instrumentation through his varied tonalities and thoroughly dynamic range.

Yesterday the band wrapped up their Hats tour, organized to promote their debut album, Hats, Gloves, and Grandfather Clocks. The album took two years to develop, as is competently demonstrated throughout. It is conceptually based on The Man who mistook his Wife for a Hat, a 1985 compilation of essays by neurologist Oliver Sachs. What I appreciated right away about the album was how the titles and pacing of each track strongly resembles a fluctuating state of disarray. From the opening interlude, “Hats,” the brooding synths provide entry into a man’s bleak, seemingly soulless void of catatonia. The song’s distant, cracked yelps and shrieks of pain somehow define the only means of communication, though internal and thus unheard. But once the instrumentation is wholly taken into account, the listener can sense someone fighting—someone otherwise pure who strives to conquer their insanity. “My Mind Askew” is the album’s first vocal-driven track, which expresses disenchantment due to a routinely underactive lifestyle. Rosie assumes the role of the disturbed man. His stationary vocals launch right into the song, emphasizing the hat as a means of assured security. They are strained, supplanted by a bare-bones rhythm section of bass, drums and lead guitar. When “I’ve got a hat on my head” is sung a third time, the sparsely integrated harmony greatly enhances vocal delivery. At the 1:56 is mark is where a harmonic, dreamy cyclone of guitar stretches over graceful percussion—perhaps a dwelling back to when life was fruitful and saturated with color. As the shroud of the soundscape clears, the nuances of delay-laden chords against the percussion are especially defined. Later on, overdriven guitars make their way into the mix, as if the man’s fit of rage has reached a boiling point. He self-deprecates, following a fiery downtuned mass of crunch and chaos. Since the album’s release, “Despondent Become” has earned fan-favorite status, and with good reason; its strength is equally utilized as both a single and album cut. I initially heard the opening riff and brushed snare rolls, thinking it was some kind of 80s post-punk homage, but I knew I was in for much more as the song progressed. Rosie’s vocals emit a double-edged quality—on one hand they seem innocent and angelic; on the other, they are merciless and determined. What ultimately results is a competent blending of vocal and guitar harmonics, and a pushing of vocal ability that surpassed my expectations. It wasn’t until the second half of the song that I became aware of the band’s true instrumental. Under normal circumstances, the soft-to-loud guitar transition predictable, but the attention to detail of each element is so well constructed. Just the right amount of cave-like reverb is employed during the clean parts, and the tinges of lead melodies again are of tremendous benefit to the vocals. Once the heavy guitars kicked in—more subtle and fleshed out this time around—the song was sent to a whole new level.

“Gloves” marks the midpoint of the album, and is cemented by an instrumental atmosphere reminiscent of a harsh winter. This brought to mind sights of tumbling snowflakes and jagged hail stones, while hands are nearly frost bitten, numb, and vulnerable. Distant chatter is heard amongst the wall of lush piano melodies, as if immersing deeply into a dream. Once the dialogue becomes clear, the man is ecstatic of having discovered a glove’s practicality, only to vanish immediately after. The sustained delay puts this notion into effect, as if the man is returning to reality. While this analogy addresses vulnerability from a theoretical standpoint, “Bones” expounds on its context. The lyrics pertain to feeling raw—experiencing harsh discomfort from ordinary stimuli, that even brighter days are spent aloof. I admired the clarity of the anaesthetic-esque chorusing effect riffs, as well as the rousing impact of the downtuned guitars. In addition to the clean and heavier parts being better defined, it was at this point that I understood the meaning behind the band’s name: even though life may seem underwhelming at times, the next day is always there for the taking. The penultimate track, “Grandfather Clocks,” is a much-needed and effective mood change for the album. I took a liking for its demonstrating a rim groove much like a clock’s second hand, but as if functioning intermittently. Rather than unleash its energy in a big, overdriven chorus, the build is gradual, and only persists along a clean, patient path. Then just like that, the final and longest track, “Comet,” brings the listener back into action. Once again, the pacing has slowed, but it has done its part in enhancing Rosie’s vocal delivery. Prior to the pre-chorus, there is a smooth integration of rhythm buildup and character execution. The chorus is rightfully definitive of the man’s struggle to stay afloat, with amped percussion feeling like one false move meaning certain death. Again, there is a pulsating climax of guitars, reaching a peak of thickness this time and putting forth a newfound sense of courage to reckon with.

Overall, Hats, Gloves, and Grandfather Clocks is a promising showcase of genre diversity in today’s challenging modern rock climate. Its precise track consistency, as well as capturing the best of heavy and dreamy elements is certainly no easy feat to pull off. After listening through these seven songs, I’m curious to see whether the band will choose a similar conceptual path, or even expand into fuller album length on subsequent releases. Any which way, Forecast Tomorrow needs to be heard.

I come from a family who is passionate about all things music. I learned to sing at an early age, and by 13, had my very own Fender Strat guitar. I tried my hardest at learning all that I could. Because I was born with cerebral palsy, I had to teach myself an adaptive playing style. I learned to write and record my own music, despite these difficulties. In college, I started making great use of my writing abilities by reviewing music, as well as copy editing. I guess it's best to stick with what you know, while welcoming a fair challenge at the same time.
Previous Album Review. Pepper: Ohana
Next Monster Energy Rock Allegiance Returns To Philadelphia’s Talen Energy Stadium September 17 & 18