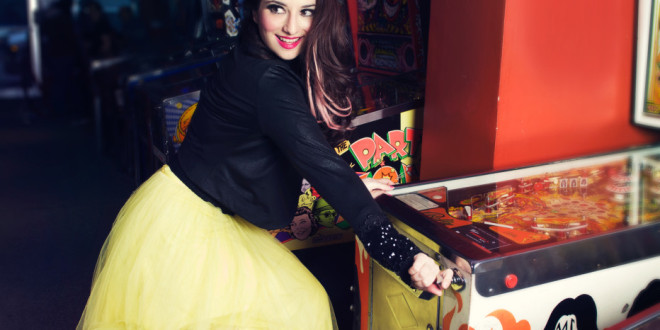 Good question! I get asked that a lot but truthfully I was only in Germany until I was three years old. Music I was listening to then was German nursery rhymes. I still have the cassette tape somewhere, those songs do have a special place in my heart. But as far as my songwriting goes, there’s no trace of it there. Same goes for my Turkish roots. I was around some Turkish music, but again, not all the time.  We’d go to some Turkish restaurants in Manhattan and in addition to the food, would enjoy live traditional music or a belly dancing performance, but, I was already too Americanized.  MTV and Radio really ruled my world.

2.There’s a huge retro influence on Let’s Play, yet it still sounds like a modern album. Were you aware of maintaining that balance during writing and recording? How did you keep that balance?

That’s really cool to hear because actually some of the songs were even more retro, more specifically a song like “Dr. Kiss Me” originally sounded like it was from the Elvis era, because that’s how I had written it and had envisioned it to sound in the recording. Then I played it for someone at Sony -who I’m still very grateful for giving me some invaluable feedback- and he said the song sounded “too retro,” that there wasn’t anything in the song or production tying it back into today. He was right.  I went back to the studio with Mikal Blue, we put our heads together, and tweaked the sound to what it is now.  We also enlisted some talented collaborators, like David Andronico, Snipe Young, Matt Rod, who are producers in their own right, to add their flavors to the album. The result is that balance of modern and retro. I can’t really take credit for it.  Mikal Blue is the captain of the ship, and I couldn’t have made this album with him and his incredible mind, experience, and talent.

Well, I mean, first of all, I was in shock because they called my house, and on my birthday, I thought it was some kind of joke! It turned out to be the best birthday present ever.  I’ll never forget that moment. Winning the Grand Prize in the World Category of the John Lennon Songwriting Competition meant everything to me, not because it is a songwriting competition that is not only international, not only open to professional songwriters, not only had 20,000 applicants the year I sent my song in, but because it’s a songwriting competition that is named after/to honor one of the most prolific and loved songwriters of all time: John Lennon. Started by Yoko Ono herself, the award still sits on my piano at home for inspiration.

Ah, the one and only Eamon! I got to write and record with him thanks to producer Mikal Blue, who introduced us, and said we were both “cut from the same cloth.”  Eamon and I were collaborating and sharing ideas almost on a daily basis because he was at the studio.  One day I asked if he wanted to sing with me on a song, and also write it too. Lucky for me, he said yes, and his gorgeous vocals are now what grace the song “Forever And Ever” on the album.  It’s one of my favorite songs because it’s of its breezy, island vibe.  An animated music video for that song is coming out in the coming weeks.  I’m pretty stoked about it.

Wow! I don’t know about perfect but thank you so much for your kind words. Summer actually happens to be my absolute favorite season.  Being from the East Coast, summer is the funnest because of warm weather, sun, long daylight hours, and also because I get to go on vacation, that one time of year, when July rolls around and I’m in Turkey, seeing my family, friends, and soaking up the sun.  So many magical summers of mine have taken place is in Istanbul, Bodrum, Antalya, Fethiye.. I wouldn’t trade it for the world and I look forward to it every year.  But here I am, digressing.  Honestly, I was out to make a super fun, light, sunny, album. I didn’t know when it would be released. In general though, it’s definitely a summer album, sure, but there are some fall and winter songs on there too, albeit just a few. That’s how I’d always want it to be.  Never one shade, but many shades, many colors of songs on one album.  That’s the way my personality is, and being a lover of summer, I couldn’t be more thrilled that this is a summer album.  The summer albums I’ve listened to have always held a special place in my heart…

Bebel Gilberto’s second self-titled album, The Frames Dance the Devil, and countless others. I can only hope Let’s Play becomes that token summer album for listeners as well.

6.Many of your songs (“Pinball and Video Games,” “Love is a Recipe”) are very visual. Is this a conscious decision on your part when you set out to write?

The Nashville school of songwriting tells you to write descriptive songs. It’s what paints the palette, and creates the story.  When it comes to pop music though, there’s room to break the rules. I had so much fun writing and recording these songs, I can’t even tell you. Especially fun songs like that, “Pinball and Video Games,” which I wrote with David Andronico, and “Love Is A Recipe,” which I wrote with Athena Marie Byrne.  After that, she and I wrote “Man Outta You” with Bernardo Aguilera and that’s also a very descriptive song, using gambling analogies to reference the game of love…  I loved every minute of it.

Eliza Doolittle was actually an early influence of mine while writing this record!  Love, love, love her. I’ve seen her perform live a few times and got to meet her once too, in Los Angeles, and tell her that in person.  As for Meghan Trainor, love her and her message, but musically she came out after I was already finished writing and recording most of my album. So that’s the only reason I can’t say Trainor influenced this album directly,  but of course I’m a huge fan of her music. As for what makes me stand out?  Well, that’s for the listener to decide. I’d say my life story is different, my personality, my background, the deeper meaning to why my album is called Let’s Play, those are all different.

The album is called Let’s Play and has a playful theme because the music is about being playful, fun, young, and bringing to the surface one’s inner child. I lost my father to cancer when I was a baby, and though I never knew him, I grew up with a large hole in my heart that I could always feel and never replace. So I got know my father from the stories my mom and other people told me. He was all about playfulness, youthfulness, and had a carefree attitude on life. He never took things too seriously and  wanted others to be the same. Mom says he drove her crazy by pushing all the buttons in the elevator in the apartment building they lived at before I was born. Cracks me up. Luckily the genes have passed onto me. She says I turned out to be just as mischievous, playful, sometimes silly, fun, smart, and stubborn, haha. I wanted to add all of those qualities into the album Let’s Play (ok maybe not stubborn), that and a few other traits into the mix, like being a tease, a little flirty, a little bit of sexy vibes, you know, because you’re only young once.

(I’m not calling myself sexy here, just saying added some sexy vibes to the music because that’s also a part of what it means to be playful, for me.)

The first album I ever bought was Wu-Tang Clan’s 36 Chambers. The most recent album I bought, I can’t remember. Ha. That says a lot right there!  Let me look into my iTunes…

I buy albums mostly by my musician friends now.  Ok, Jenni Alpert’s Nothing Less is the latest CD I bought.

A vacation, perhaps? Just kidding! More werk, werk, werk, werk, werk, as Rihanna would say.  Releasing 2 more singles and music videos for the album, an album release concert in New York City on June 26 at Rockwood Music Hall Stage 2, 8:30pm, and an upcoming Fall/Winter Tour, dates TBA.  In the meantime, I also sang on Fox TV so that’s going to air in June before the album is officially released, on June 24.

Thank you for being so cool and sticking with me so patiently.  I really hope you’ll like the new album. I invite you to come on this journey and play with me. Are you ready? Let’s Play!