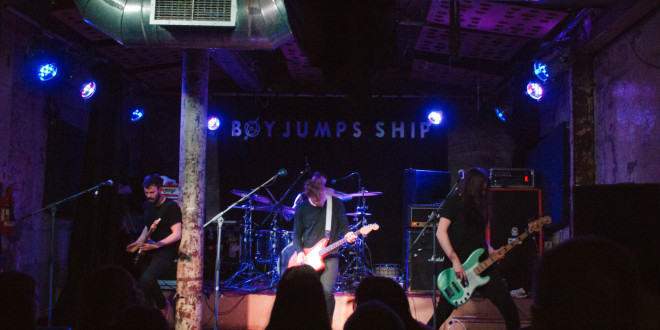 It was refreshing to see a female lead singer take to the stage in support Banshee. The moment the drums kicked in I got a great feel for the band within that short time. They were powerful and the lead singer had an amazing voice, if not a little unusual but I think that’s what made they so unique. She owned the stage and got so into performing; she danced and just stunned me with her impressive vocals.

They reminded me of a young Lzzy Hale in her early days of Halestorm which is incredible, it’s always good to see a strong female lead, owning a stage and captivating an audience.

Cheap meat, a great three piece, personally not really my cup of tea but they seemed to have the crowd bopping along pretty well. Now they may not have been for me but there no doubt in how much they loved performing, they put a lot of energy into it and were all over the stage, the lead singer of the band being from Aberdeen they did make a few jokes at his expense.

When a little power outage came upon the the lead guitarist the bassist and drummer played us a little jazz number. When the show was back on the road they delivered well, the guitarist even showing off a little with an impressing solo during a song they wrote about Eddie An Valerie Van Halen, obviously a big fan of the band, which was very clear in their playing style, it was somewhere between 80s hair rock and modern day rock.

The third band was one I had been highly anticipating as I had been told nothing but good things about them from friends and they didn’t disappoint. The 21st State came out to their song stepping stones an it was incredible, they set themselves up for an amazing rest of the show and they delivered, launching into jigsaw it was obvious how much they love performing, a particular member that stood out for me was Craig Horne on guitar and vocals, I had previously seen Craig when he was only young preform by himself and even then he was incredible but his massive voice gave me Goosebumps.

The electronic sound they bring into their music works so well wit the rocky tone they have, they mentioned before they show they have a lot of musical influence when it comes to adding that sound.

Not a lot of bands pull of that big addition to their music but they seem to manage it very well. I was so impressed with how amazingly they two voices worked together, Craig and Andrew Complimented each other so well. The whole band was musically sound, it was actually a buzz to watch, that feeling in your chest when you watch them. When they launched into the last song that’s when things got interesting, the two floor toms at the front of stage were put to very good use during colours. The beat of them in sync could be felt in the bottom of you belly it was amazing.

Watching Boy Jumps Ship live was such an experience, I’m captivated by bands that put so much energy and love into their performing and I think they have to be one of the most passionate bands, the had such a big stage and they used to their full advantage, it was so rewarding to watch a band who have kept their roots despite how amazing they’re doing. I little thing that made chuckle was their bassist who was incredible but looked like he belonged in a band like Metallica with the long hair and the way he moshed. This sounds weird to see but I always love to see just how a sweaty a band get because to me it’s a gauge of the energy they put into it and I could feel just how much they put in because it radiated throughout the whole room.

Playing some song of their debut album got the crowd going, they even had a great little clap going. There were some very dedicated fans to the band for sure because even though the album had only been out for two weeks they already knew some of the words.

They transitioned easily into a really beautiful heart-warming slow song that built up to such a beautiful crescendo, I really can’t fault tier song writing because their lyrics were beautiful and I felt like every person in the room had an emotional connection. Make you proud was one I was really excited about, and to have it come after such a slow song they made it word, the drums pounding and the stage being filled incredibly by them. For the last song they brought the crow forward, because it was getting hot and sweaty and boy was roasting, I couldn’t stop myself from head ban singing you could feel your chest rumble with the music, it was the kind of sounds that you could still hear after you had left the venue, your ears ringing and a massive smile on your face