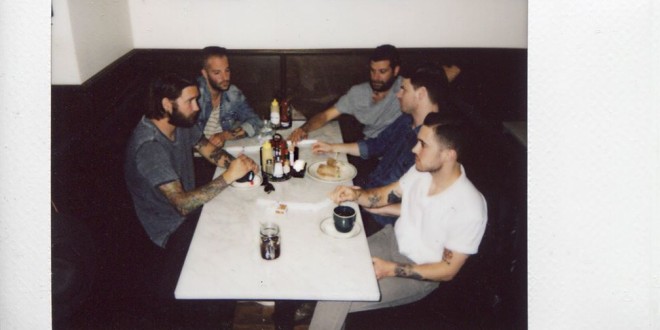 EP Review. Palmas: To the Valley

The members of the band Palmas may hail from the east coast, but the music on their EP To the Valley highly evokes the feeling of California sun infused pop.

The album starts off with “Buzzcut” a short purely instrumental introduction that is under two minutes long and with its psychedelic beach party vibe it perfectly sets up the tone for the rest of the record.

“I Want to Know (Your Love)” definitely has a retro feeling to it, bringing out the sounds of the 60s, but this particular track stands out for being a little darker in content. Lead singer Kurt Cain connects with listeners as he sings “are you afraid that you’ll never be all of the things that you said you would be by this time in your life,” and it is lyrics like these which make this tune a thing of beauty. It is all together a swoon worthy song, in fact it almost begs to be the leading single, and although the tone is a bit more dismal than then other songs on the album, it still fits perfectly on To the Valley thanks to the throwback element.

Right from the first few notes of “Take My Hand,” Cain sounds as if he is channeling a more surf rock version of something Gene Pitney could have released decades ago. The midtempo track adds a bit of a haziness to the tune, and also a dash of melancholy as Cain sings “I want to know what made you so cold.” Yet there is still very much a pop sound to “Take My Hand” and the lyrics which have a beautiful imagery to them like “take my hand through the summer days/I can feel the sun/I can feel the waves” paints a picture in listeners heads, something Palmas have a knack for doing. Perfect for a night spent on the beach around a bonfire, “Take My Hand,” is a moody, romantic, and gloriously crafted song that will leave a lasting impression on an audience.

“Sweet Water,” is the most infectious track on an album that is full of winners. Here, Palmas dig into some Beach Boys vibes and conjure up images of a perfect summer day with a girl. “I’m gonna find a pretty girl and take her out to the beach,” Cain smoothly sings with such peppiness that I’d be hard pressed to find anybody who could deny tapping their toes along with this tune. The chorus is a downright delight to the ears, about as catchy as anything heard on To the Valley, making it a song one should crank up while driving down the highway with the windows rolled down, singing along at the top of their lungs. If one is looking for a sunny pop anthem for the summer, they need look no further than “Sweet Water.”

Though “Better Guy,” has a slower tempo it still has that undeniably fun and flirty feeling to it. With a chorus of “ooh’s” behind Cain, which add texture to the already retro infused song, the surf rock element takes full force, especially when Cain lowers his register. It’s the type of tune that sounds so authentically 60s it might fool a few people into thinking it was actually released years before. That in itself is a feat that not many artists can accomplish, but Palmas make it look effortless. It’s sweet and simple and that is part of Palmas charm, and proves to be another golden moment on the album.

The EP closes out on “San Francisco Bay” which starts off with an announcer introducing the song as it is being played on the radio or live in concert, which is a nice added touch. An acoustic guitar serves as the main instrumentation here, keeping the tune clean which lets Cain’s voice really shine and take the spotlight. It is still very much a pop song, with imagery of summer days, but it never feels repetitive as Palmas master their sound, tweaking it a bit, with each and every track on the EP.

To the Valley is a pure joy to listen to from start to finish, as close to a perfect and genuine representation of a band as it can get. Get your hands on a copy of the EP and get ready to embrace the upcoming summer days with a new favorite soundtrack to the season.