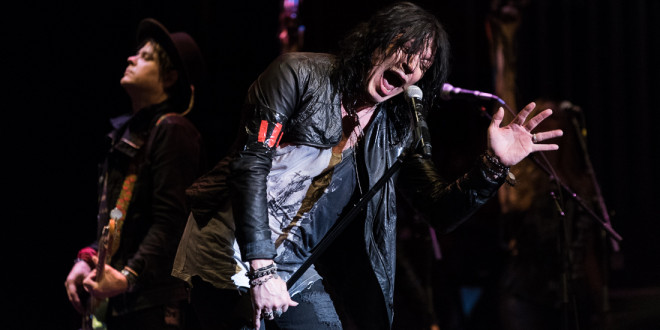 Best known for his contribution to 80’s glam metal outfit, Cinderella, vocalist Tom Keifer has taken his solo project on the road. The Way Life Goes tour hit the Bergen Performing Arts Center in Englewood, NJ and brought a whole lot of rock attitude to an otherwise dreary Friday night. Combining an array of Cinderella classics, with fresh tracks off his solo album, The Way Life Goes, Keifer proved that there is still a place for rock anthems and love ballads in this industry.

With a thirty year career under his belt – an outstanding accomplished he humbly thanked his audience for – Keifer made it look effortless. Flanked by wife and musical partner, Savannah, and a full-fledged band, Keifer fed off the audience’s energy and batted it back tenfold as he tirelessly stalked the length of the stage with a mic in hand. While the night passed quickly through the pick-paced 70-minute set, it was jam-packed with all of Cinderella’s crowd favorites. A chilling acoustic arrangement of “Don’t Know What You’ve Got (Till It’s Gone)” smoothed into an outstanding cover of Prince’s iconic “Purple Rain.” Not to be missed, the beloved power-ballad “Nobody’s Fool,” and bombastic “Gypsy Road” also rounded out the full set.

The band will be releasing a deluxe version of The Way Life Goes over summer, with tour dates spanning through the end of the year. In a recent interview with Music Existence, Keifer mentioned, “the writing process for the new record has begun. We’re gathering seeds of lyric ideas and song ideas here and there. We hope to be making the new record in 2017.”

Check out some of our shots from Friday night’s rocking performance, and be sure to catch Tom Keifer on tour this summer (dates below)!

Setlist:
Once Around The Ride
It’s Not Enough
Heartbreak Station
Somebody Save Me
Shake Me
Don’t Know What You’ve Got (‘Till It’s Gone)
Purple Rain (Prince cover)
Nobody’s Fool
Solid Ground
Night Songs
Coming Home
Shelter Me
Gypsy Road
It’s Only Rock n’ Roll (But I Like It) (The Rolling Stones cover)