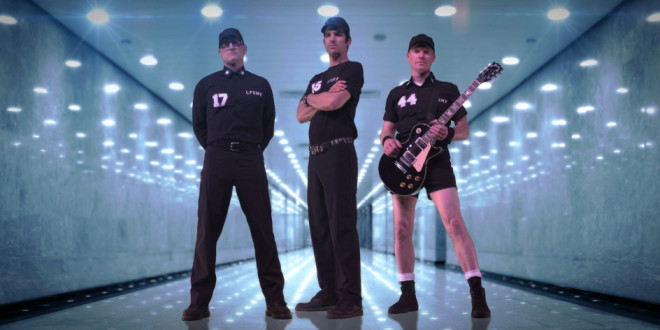 Bobgoblin is the kind of band-next-door you stumble across at a festival and can’t help but get caught up in. Their songs are robust and catchy, if perhaps slightly repetitive at first listen. But that’s the thing, they know what they want to play and just go for it. You can easily tell that they have been playing together for as long as they have; there’s a certain surety in the lyrics and beat, twinned with maturity that only comes with years of practice. And then there’s the signature playfulness of a band so used to playing in garages.

What’s clear is the mix of influences to be found in their music, with punk as the overriding tone. The new album (and its tongue-twister of a title), Love Lost for Blood Lust encapsulates all of the sounds that they have been toying with since the 90s, whilst maintaining the continual energy and intensity that they strive to create throughout their work. Give the album art a closer inspection and in the haze you’ll see a clue to the strong message behind the music: a Godzilla sized fat-cat dressed to the nines in his dinner jacket leaves a smoking city in his wake, cigar clutched in hand.

The piece of advice that I would give on listening to this album is to listen carefully from start to finish, as it matures from track to track. When you reach songs such as Fighting Machines and Turn Gears Turn you start to really appreciate the band’s cynicism and dry wit. This is where things start to get particularly interesting. A personal favourite is Eulogy For Poor Daniel; a celebration of the everyman beaten down by the system. Lyrics such as: “we took all that he gave and danced on his grave,” speaks deeply to many listeners I would imagine. Again, the humorous rather than angsty overtones brings out the real strength in their music.

The band’s unrelenting energy is maintained throughout the album without respite up to Eternal Snow, the crashing rhythms cleverly evoking an oral image of life as a bleak and snowy tundra. And then we come to the final track I know a Place, and there is a sudden ebbing in the intensity, an unusually slow start to the track, which begins with the enticing hope of escape to a better place. But it’s not long before the full force of the band crashes in once again, and that glimpse of a different, promising world is quickly forgotten.

When you arrive at the end of Love Lost for Blood Lust, you’ll feel as if you’ve been pushed and pulled all over the place before being deposited in a fulfilled, if exhausted, heap. There is so much going on in every song, in every lyric even, that you will need plenty of time to unravel the wit and gritty humour, in order to uncover the stark realism beneath. They present some cynical views of society indeed, but they do it with the wry grin that keeps fans coming back for more.

Previous Why Rising Pop Star Mack Benton May One Day Be In The Same League As Justin Bieber, Maroon 5 and One Direction
Next Mix Tape: Trap Alive