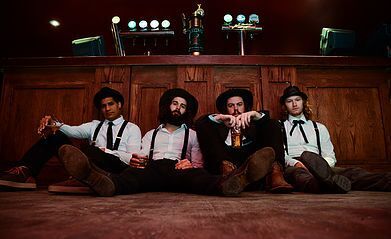 Canada’s The Dead South often refer to their band as “Mumford and Sons’ Evil Twins” and take a tongue in cheek attitude with their aesthetic of old western pioneers. But make no mistake, The Dead South are a genuinely good band that goes far beyond how they bill themselves, which is showcased on their debut album Good Company.

“Achilles” has the signature banjo sound that The Dead South are known for, but the instrumentation is a bit lighter. What one will find quickly while listening to the LP is that The Dead South are master storytellers that really know how to bring a song to life. Here, the lyrics are very visual “I am a man/I am the wind/I am all your deepest sins/I am the sun/I am the moon/I am all your sweetest tunes,” which helps listeners delve themselves deeper into the track. It strangely has an 80s alternative feeling to it, even though its roots are definitely modern folk, and in under three minutes it packs in just enough material for listeners to digest and get into.

One, if not the best tune on the entire album, is “In Hell I’ll be in good company.” Just from the title alone it is intriguing and will make an audience curious to the story behind the name. The bookend whistling at the start and end of the song, along with snapping fingers, sets this song apart from the rest of the tracks on the album. The lyrics are especially well written and are very visceral which match the tone of the song which is about a man who knows his wife is cheating on him and feels that if he kills his beloved, they would both meet in Hell. “It didn’t hurt/flirt/blood squirt/stuffed shirt hang from a tree” are just some of the lyrics that give listeners a gut reaction and paint the picture of this story so well, making it a well crafted song that will stick out to an audience.
“Honey You,” shifts tone slightly as there is a soul element to this song that runs deep. “Do you remember when the ocean went mad and we were to blame?” the lead singer croons in a gritty fashion. The signature banjo is still featured, but it is the appearance of a cello that brings this particular track up onto a different level than any other song on the album. There’s something quite beautiful and haunting to “Honey You,” and at some points even sounds like something Panic at The Disco could have written. It’s the most radio friendly track on the LP, balancing folk, rock, and alternative genres together to create a song that is all together unforgettable.

A dark influence is felt strongly on “Deep When the River is High” talking about devil, which goes so well with the look and feel of the band. Again the cello helps to bring an extra layer of grit to the track, haunting and unsettling. The depth that this song displays once again showcases that The Dead South are not just merely a fun act, but one with substance that goes beyond their evil twin of Mumford and Sons comment. Though the band are clearly having a ball with their look and sound, anyone who listens to the album will quickly realize that the music holds up against Mumford and Sons in the folk scene and that they have carved their own way into the folk world.

Though the album is pretty solid, the main complaint is that with fourteen tracks, some of the songs tend to blend into one another, especially upon ones first listen. There are clearly standout tunes, but Good Company is definitely an album that gets better upon repeated listens. There are also some disappointing moments on the record such as “Long Gone” which suffers from a delivery of lyrics that are said in such a rapid fire style that one can’t tell what the lead singer is saying, and on “Manly Way” which has a playful tone that doesn’t fit in with the rest of the album. Still, the LP is a great contribution to the music world and if you like folk music, one should definitely see what The Dead South have to offer.