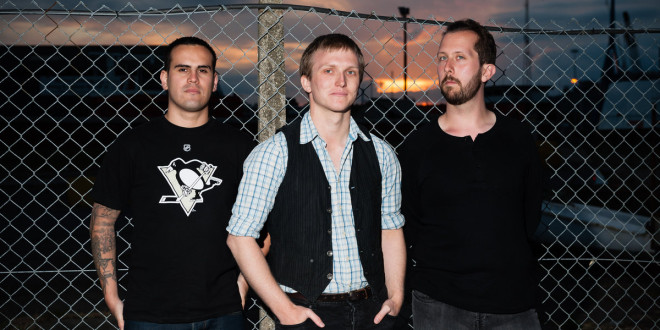 In late 2011, three friends—Andy Clarke (vocals, guitar), Alex Body (vocals, bass, synthesizers) and Alex Dunbar (drums)—formed Habu out of mutual respect for challenging yet accessible music. Eventually, Habu’s visibility in the UK progressive rock scene earned them slots alongside legends Uli Jon Roth, Elena Bonham and Arthur Brown. And it doesn’t stop there. The band’s rough-hewn, potent debut in 2014’s To the Stars cemented impact further, with magazine write-ups from Rock Society, Powerplay and Fireworks. Now, after two years of reinvention and realization, Habu emerges a much tighter and seasoned unit than ever before with their highly anticipated follow-up, Infinite.

Infinite’s album’s art alone was enough to draw my curiosity: a black hourglass in vivid-blue shadows, cracked at the base, its sand leaking out in clumps. When I got to the music itself, I was even more taken aback. Just listening to the opening riff of “Truth and Illusion” is like unearthing an early 80s prog classic (think keyboards-era Rush, only British). That element is brought out in its melodies, but especially by the album’s analogue production. By keeping the instrumentation warm and collective, the vocals don’t come off as showy and the limelight is centered on the band as a whole. All three members showcase a balanced dynamic between one another, which is a crucial component not only in making a progressive record, but delivering an authentic performance. Up next is “A Thing Called Evil,” which bears a strong initial resemblance to Subdivisions, but then explores its own ground for pacing and experimentation. Both songs so far demonstrate a solid thematic focus, the first observing fickle behavior amidst trying times, and this song of once-dormant emotions being unleashed in the heat of anger. Bridging the gap between these themes is a harmonic bass foundation hitting all the sensible notes, while the guitar hooks sustain a sufficient catchiness. Again, that energy is showcased competently on “Dead Weight”. I couldn’t get enough of how nuanced the melodies were. At this point, the fluency of their execution extended beyond playing ability. It also meant the ability of the melodies to expound on a theme; in this case, the confirmation of such intense anger holding no clout unless justified.

“Heavy Chains” is where I could particularly relate from a personal standpoint. Often a combination of uncertainty, vulnerability and bizarre life turns produces an irrational fear that has prevented—and from the song’s context, sheltered—me from facing a seemingly impossible challenge. Once I take charge of the situation, however, that is when I am assured of my potential and can subsequently move forward. Not always do the band members obligate themselves to a showcase of virtuosity, and to me, that actually helps the flow of the music. It allows for the straightforward parts of the song, namely the chorus, to be defined and all the more substantial. The middle of the album is marked by “Measure of a Man,” propelled by a dreamy chord sequence and some of the best harmonic lead guitar work I’ve heard in an intro. Without hesitation, a simple fill paves the transition into the verses, bolstered by a chugging bass groove. To my surprise, there is no direct description of the man’s motives outlined in the song. Instead, the listener is left with simple background, and a series of questions giving insight into what he could be. This type of cleverness is also enacted into two instrumental jams with tongue-in-cheek titles, “Eat the Sun!” and “Isn’t That Where We Came In?”. Both songs connect seamlessly, morphing into the penultimate “Grain By Grain”. This song ties back to album art, stating that time is gradually lost even as we are compelled to cling to past moments of glory. As another point of Rush influence, album’s general concept plays similarly to 2112, where man holds his own against forces both visible (mass hysteria) and invisible (crippling doubt) in spite of oppression. Finally, the title track brings the album to a wrap, and is full of multiple complex phases to demonstrate full creative expression. Even so, the song paces itself in a way that is more sensible and straightforward, without detracting focus listener in through its entirety. Each element of the instrumentation gets a moment to shine thanks to its structural fluency. A direct example would include the solo beginning at the 2:07 mark, initially sparse but gradually increasing in clarity and impact. A minute after that phase, the drums assert their dominance while the guitars become a backdrop to support them. In an interesting twist, it is actually the synthesizer that subtly unifies the guitars and percussion. The overarching theme of infinity does not set in until the latter half of the song, where it is portrayed as a kind of cycle that brings the past, present and future full-circle.

Overall, Infinite marks a much better focused direction for Habu. The album is not only a sincere channeling of progressive music from the past, but an effort to bring a sense of social standing back into modern rock music. The lyrical concepts are presented with universal appeal—equally profound and poignant, while keenly acknowledging an audience’s ability to offer their own interpretations. Any fan of classic Rush is certain to keep this album on repeat. Once you listen to those opening riffs, the entire album is well worth it.

I come from a family who is passionate about all things music. I learned to sing at an early age, and by 13, had my very own Fender Strat guitar. I tried my hardest at learning all that I could. Because I was born with cerebral palsy, I had to teach myself an adaptive playing style. I learned to write and record my own music, despite these difficulties. In college, I started making great use of my writing abilities by reviewing music, as well as copy editing. I guess it's best to stick with what you know, while welcoming a fair challenge at the same time.
Previous Gallery: RavenEye at House Of Blues in Chicago, IL 04/27/16
Next Sharon Knight Releases Stunning New Album, “Portals”