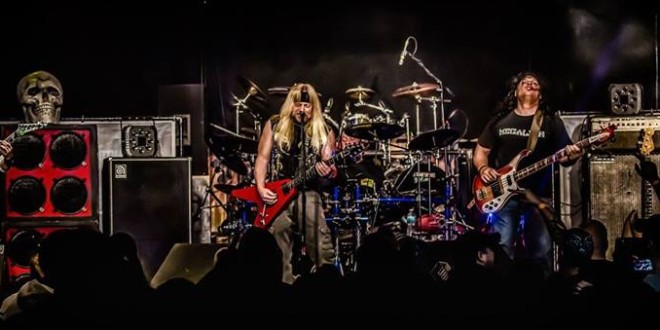 Album Review: Conquest – Under the Influence

As a band that has been around since 1988, thrash metal outfit, Conquest, have already created a well-established discography of original material throughout the years. With such a lengthy background in the music industry, it’s rather surprising, to say the least, to see them release an album devoted entirely to cover songs. Starting back in 2014, Conquest decided to take a different direction with their live shows and began devoting extra sets entirely to performing covers of some of their biggest inspirations in the metal field. The show was given the title of Tribute to the Metal Gods and was the starting ground for what would soon develop into an entire record that focused on these various tracks of homage. With the album Under the Influence, Conquest form a tracklist composed of their renditions of some of their favorite hard rocks songs, with legendary artists ranging from Iron Maiden to Black Sabbath.

What better way to start off a heavy metal tribute album than having your first track honor the likes of Judas Priest. Though what makes this introduction interesting is the song choice, Metal Gods, from Priest’s incredibly well known British Steele record. Rather than beginning with a more “fan favorite” track, such as Breaking the Law or Living After Midnight, Conquest decide to try their hand at a somewhat less commercial song choice. This actually gives the album a strong start because through this decision, the band has shown that this album isn’t going to simply be filled with only iconic metal tracks that even casual fans are familiar with, though there are definitely some more highly recognizable songs later on, and this gives the record a unique style. It’s clear that the band has a passion for the genre and it truly comes through in their choice of material. As for the song itself, it’s a nice blend of traditional metal which stems from the track’s original songwriters, and the classic thrash style that Conquest have been known for throughout their career. Derrick Brumley is able to successfully honor the likes of Rob Halford while still adding enough originality to give the track a sense of different flavor.

As the album progresses, the band is able to dive even deeper into their list of influences and offer some interesting takes on other metal classics. In their rendition of Wrathchild, one of the most recognizable Paul Di’Anno Iron Maiden tracks, the band shows that they are capable of paying tribute to their idols while still bringing their own sound into the picture. The band’s instrumentation not only shows that each member is more than familiar with the style of music that they represent, but that they also simply enjoy working on material that they were inspired by as musicians. Whether it be the cinematic scale of Metallica’s For Whom the Bell Tolls or the hard hitting grit of Motorhead’s Ace of Spades, Conquest are able to form well-crafted cover songs while at the same time present their own style as well.

If there was one slip up during the album’s runtime, it would probably be Conquest’s take on the Bon Jovi hit Wanted, Dead or Alive. While the rendition isn’t poorly performed, the attempt to make the track heavier with a dose of thrash doesn’t quite work out. Brumley himself stated that the song was quite difficult, and it tends to show through in the recording. With the more aggressive instrumentation, the song’s buildup doesn’t feel as climactic as the original version and it overall feels rather forced. Although, the band quickly gets back on track with a cover of Motley Crue’s Red Hot, which falls much more naturally into the band’s soundscape.

While Under the Influence doesn’t break any barriers in the metal genre, it’s still a well-made album that pays tribute to a variety of legendary artists. The album will definitely be enjoyable to those who are already fluent in the hard rock genre and those who have been following Conquest for a quite a long time will probably like hearing the band take a different approach with a record such as this. Under the Influence offers a fun series of covers that does a good job of capturing the old school sound of some of the most important names in hard rock.

Cain Miller is an aspiring writer who hopes to work his way up and gain notoriety for his material. Having written about film, television, music, and sports, Cain is always looking to gain as much experience as he can and continue to improve his writing abilities.
@cainemiller
Previous Album Review: Mindshift – Horizon
Next Gallery: RavenEye at House Of Blues in Chicago, IL 04/27/16