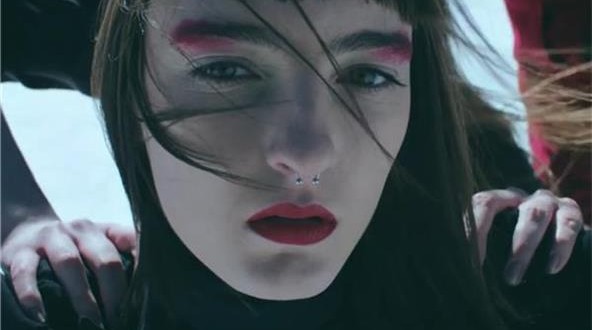 Los Angeles based singer/songwriter Lena Fayre is one of the finest purveyors of electropop currently working today. The release of her latest single, “Cry”, will mark a demarcation point when looking at her career. This will be the moment people point to when Fayre transcended any lingering rough edges in her presentation and gave her growing fan base the first solid evidence of her full artistic maturity. “Cry” is a fully conceptualized piece with specific lyrical content and an accompanying backing track that matches the lyrical mood. Each element of the song is fully functional and Fayre resists any self-indulgence – instead, everything is honed to a sharp focus and the track never overstays its welcome. Everything is rendered with exceptional clarity and the balanced, spare arrangement never threatens to overwhelm the song’s central element – Fayre’s voice.

There’s a solid DIY aesthetic informing this release. Fayre distributes her music through her own label and is a multi-instrumentalist capable of producing memorable music with little collaboration. Unlike many DIY artists, Fayre’s finished products never sound amateurish. Fayre’s songwriting, production instincts, and singing skills reflect her deep talent – something that isn’t teachable, really, but rather something ingrained in the individual’s DNA. The song’s lyrics bear the mark of that individualistic slant. Fayre spins the song’s familiar themes in unexpected ways with flashes of unusual imagery and a vocal that helps underscore the personal nature of the song. She keeps her word choice quite accessible without ever dumbing down her approach – this is eminently relatable music that, nevertheless, never sacrifices its wits for the sake of making a connection.

The musical elements are spartan. It isn’t to say that the backing track is some skeletal framework for Fayre to extemporize over, but instead, Fayre’s pursuit of a minimalist atmosphere reflects the song’s content and mood. The song, even in its most rousing moments like the chorus, has a pensive and moody air. Keyboards swell and flood the song with light at that climatic moment, but it’s the harsh white glare of clarity rather than any comfort to Fayre.

It isn’t all doom and gloom. Listeners will be hard pressed to deny the inherent beauty of the vocal melody and, particularly, Fayre’s expert phrasing. She weaves and spins through the song like a graceful dancer and never misses a single step. It’s an additional bonus that she clearly pays such close attention to the backing track and further belies any criticism of its musical weight. Fayre is clearly a singer far from oblivious of the music around her and tailors her delivery appropriately.

“Cry” is a turning point. It is a conclusive time in Fayre’s career when she sheds the moniker of “rising talent” and enters the same firmament of stars she likely once dreamed of joining not long ago. The marketplace will be the final judge of her career trajectory, but it’s the only thing capable of undermining her. The tools are all here. Lena Fayre is a musical force to be reckoned with and songs like this promise she will be for many years to come.