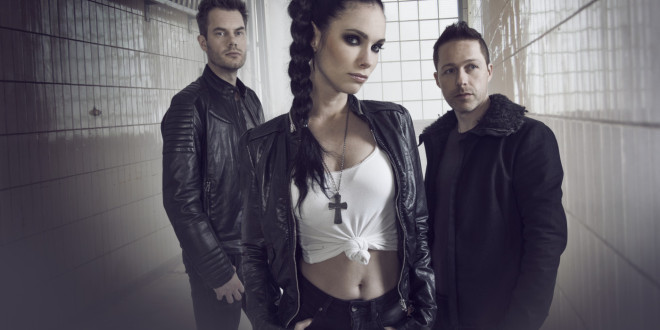 Dutch trio, Nemesea is known for not being afraid of playing with their sound. Their latest release, Uprise (out April 29th via Napalm Records) is no exception. Only in this iteration, the band takes their distinct blend of alternative rock/electronica—first introduced in 2007’s In Control and then mastered in 2011’s The Quiet Resistance—and adds a much softer touch.

This experimentation has ended well for the band in the past, segmenting them as one of the more unique acts in the symphonic metal and now alternative rock worlds. However, Uprise does fall a little flat compared to past releases. While still definitively a Nemesea offering, the album as a whole seems to lean more toward pop and lacks that bit of “oomph” that would solidify it as a masterpiece within either—or even both—pop and rock stratospheres.

This is not to say Uprise is without its merits. Harder tracks, such as the opener, “Hear Me” are satisfying. Built on HJ’s simple (yet catchy) guitar riffs, Sony Onderwater’s high-tempo bass, and soaring synths, the track is pumped full of energy. Manda Ophuis’s vocal range is on full display here, as she sings one line and adds a soft scream to another. Ophuis is crystal clear and in no way overpowered by the layered background, which in itself is something to be enjoyed. The track also features an exceptionally powerful bridge, with Ophuis’s lines punctuated by her bandmates’ shouts.

A slower track, “Let It Burn” also marks a standout. Ophuis’s voice softly caresses the verses before surging into the chorus. The music complements this transition by starting with a soft synth, beat, and keyboard combination—with the guitars only chiming in during the track’s high points.

The next track, “Time to Make It” works as an anthem as Ophuis croons, “Don’t let him tell you / What to do / With your life / And I assure you, promise you / Don’t give up this fight.” The contrast between “Let It Burn” and “Time to Make It” makes the transition itself a high point on the album.

While not destined for continuous repeat, Uprise is still worth one, two, or even more plays. (Note: the album plays much better on a good set of headphones versus a stereo).

Want to know more about Nemesea? Check out their website and Facebook page, and order Uprise here.