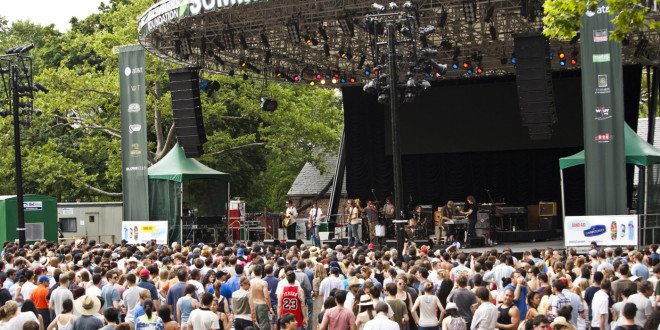 City Parks Foundation is proud to announce the 2016 season of SummerStage, New York City’s largest free performing arts festival, bringing more than 100 free performances to Central Park and 15 neighborhood parks throughout the five boroughs. With performances ranging from American pop, Yiddish Soul, and Taiwanese music to dance, comedy and theater, SummerStage will feature more than 200 unique artists, filling a vital niche in New York City’s summer arts landscape, ensuring that New Yorkers will have access to exceptional cultural experiences, free of charge. Since its inception 31 years ago, SummerStage has benefited more than six million people from New York City and around the world.

Having highlighted hip-hop music and culture in 2013 and salsa and Latin music in 2014, the festival is thrilled this year to honor another distinctly New York musical form: Jazz. The 2016 season of SummerStage will both showcase exceptional performing artists from around the globe, and will also feature more jazz performances than ever before, with nearly half a dozen planned for Central Park and many more in neighborhood parks across the city. The focus on jazz this season coincides with the upcoming centennial of the musical dawning of the term “jazz,” as well as what would have been the 100th birthdays of late jazz greats including Dizzy Gillespie, Thelonious Monk, and Ella Fitzgerald

“At City Parks Foundation, we believe culture should be convenient and affordable for everyone. Our SummerStage festival removes the barriers to culture, bringing world-class artists, topical and popular, to neighborhood parks across all five boroughs, free of charge,” said Heather Lubov, Executive Director of City Parks Foundation. “SummerStage brings together New York’s diverse communities in authentic and meaningful ways, making high quality performing arts — from music to spoken word, circus and contemporary dance — truly accessible. We are thrilled to bring another season, filled with exceptional artistry, to communities across the City.”

“The SummerStage festival celebrates the rich cultural fabric of New York City,” said Erika Elliott, Executive Artistic Director of City Parks Foundation. “This year, we’ll celebrate the 100th anniversary of jazz, with both emerging and master musicians, who will highlight the long legacy jazz has in the city and its continued impact on New Yorkers.”

“Capital One is proud to once again support SummerStage as it celebrates New York’s artistic energy and creativity,” said Michael Slocum, President, Commercial Banking and Northeast Regional President, Capital One. “The arts build communities and enrich lives, and this remarkable festival embodies our commitment to investing for good in the diverse communities where our associates live and work.”

The complete SummerStage schedule follows. For the most up-to-date scheduling and line-up for all SummerStageprogramming, follow SummerStage via the below links and visit cityparksfoundation.org/summerstage for festival information.

This is quite an original song that combines genres and invents a new one. Alex …