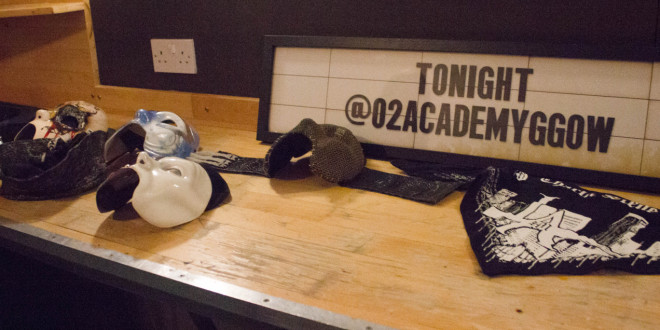 I’ve been to my fair share of shows at Glasgow’s O2 Academy but when I rounded the corner to the venue the sheer queue of people for Hollywood Undead, tailing all the way down the side of the venue and down the other side of the street was phenomenal. Hollywood Undead merch everywhere, from some of their older tours right up to their previous album release tour. It was clear there were some hardcore fans there.

From the offset Attila had the crowd rowdy and jumping, a dirty an incredible bass sound residing through the venue. You could tell there was some hardcore fans down the front that were rocking out harder than everyone else. As a band I’ve never really listened to before I was surprised how much I enjoyed them and when they’re backdrop stated ‘Parental Advisory: explicit’ I could tell why, the first words out lead singer Chris Fronzak

mouth being ‘put your middle fingers up if you don’t give a fuck’ and thats exactly what the crowd did. Now when the words circle pit were screamed the crowd instantly parted and it was incredible. The music fitting perfect in time with moshing and jumping. The sound was so heavy and incredible you could feel the ground shake. The devil horns were in the air and I could tell this show was going to be a good one.

A call from crowd surfers and a circle pit sent the crowd fucking insane, bodies were coming fast and the house was being torn down while the bands tore the stage to shreds, performing with one of the most incredible constant energies I’ve ever seen. The crude lyrics seem to put nobody off as they were screamed, shouted and yelled by the crowd. It was beautiful to watch them just go mental. It was the last night of the HU tour and fans got a shock when Johnny 3 tears joined the Attila boys on stage an gave a little heartfelt speech about making some new brothers on this tour and it was great to see the bands having so much chemistry and getting on as well as they did.

And Chris Just encouraged the crowd as they went onto their hit Break Shit by telling them that Manchester were crazy, nothing like encouraging a healthy bit of competition.

The band had a great range in their musical stretch, playing heavy music you’d expect behind a metal song but having fast rapping hip-hop lyrics which just proves, that even if they aren’t your cup of tea what they do musically is incredible, the change from song to song. I watched the band and the crowd in awe as the chanted ‘666 party with the devil bitch’ and it was truly a sight to behold. The band made that stage theirs; they totally owned it with the charisma and stage presence. Chris Had a great rapport with the crowd, chugging beers and encouraging them to get some merch to fund their last night to get fucked up on the tour or ‘the more you buy the more chance we’ll die’. It was great to see every single in that crowd go absolutely crazy for their last song of the night and of the tour. They put every ounce of energy into their performance and it was obvious that they love what they do and their fans do too.

A slow version of California Love by TUPAC Began to play and the whole room was lit a deep blue and all the phones went up to record the amazing intro. And I was not ready for the entrance of the band, in their incredible masks and Funny Man dawning a Lion Rampant flag round his shoulders,

giving the crowd that feeling of love from the band. Launching into Usual Suspects I could feel the ground shake and the walls vibrate with the jumping and the pound singing of the crowd. Within the first moments I knew that they were the kind of band to give it the most incredible amount of energy and I wasn’t wrong, it was a constant upkeep though the whole show. The smell of sweat, beer and what can only be describe as a good time what’s all you could smell.

I must admit the ideas of masks while performing intrigued me a lot and I think it added to the theatrics of the whole performance, it made everything more real. Musically I couldn’t fault them, they don’t miss a beat when they preform and it’s a pleasure to watch them preform because they take to the stage and with the 6 of them, instantly you know they own the room and the crowd. It’s theirs. When the masks came off we got even more of the personalities and the interaction with the crowds during the performances was beautiful. Singing right in their faces, sweat already pouring off them. Showing how hot and sweaty it was already.

The did another Attila. Got the crowd rowdy by letting them know that Scotland was home, the best place to play and I couldn’t agree more. All the artists I’ve seen have always spoke of Glasgow being party Central.

Kill Everyone was when I really caught a glimpse at just how amazing musically the band were an what a range of voices they have within the sex-tet. The vocals made realise the sheer talent that this band possess. There was a constant urge for the crowd to sing themselves and it’s great because you could see every fist being punched in the air as they belted out the lyrics. Bringing a fan on stage sent everyone into a frenzy, Olly the fan taken on stage to play guitar with them began to cry and freak out so she just got to chill with the band and they pulled up the most Scottish man they could, Connor who gave us a lovely flash if his bum as he climbed on the stage. We watched as he shredded on guitar to Comin in Hot. I’ve got so much love for the Glasgow crowd because they treated the song like their anthem, totally losing their shit.

A song I was really looking forward to tonight was Bullet, as one of the few songs I really knew by the band and for me it has a really powerful message behind it and I think everyone in the room felt the same because the atmosphere was unmatched to any other gig I’ve been too.

They moved on so swiftly from a song about suicide to partying and getting absolutely crazy. They’re incredible versatile so they really are for everyone. A touching speech from Johnny about the fans getting them where they are today led us into the last song before the encore. And my what an encore it was. Joined on stage by from the boys in Attila to the signature anthem Everywhere I go and Hear Me Now. Now I’ve seen my fair share of rowdy crowds but this was something else, I’ve never seen a crowd move like this, never witnessed the insanity and passion that I have tonight and I would advise that before you die you see Hollywood Undead.