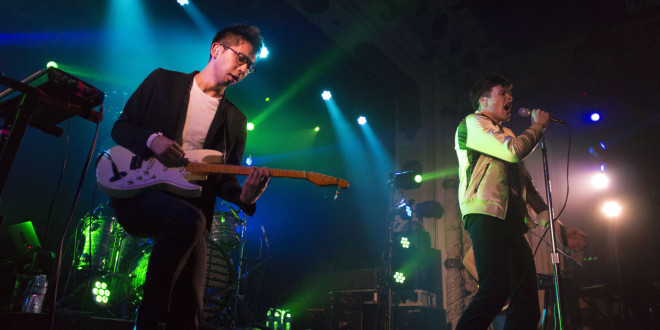 Magic Man is a synth-pop band hailing from Boston, MA. They found great success with their 2014 album Before the Waves, including hit songs “Paris,” “Texas,” and “Waves.” Fronted by co-founder Alex Caplow, Magic Man is currently playing around the U.S. on the Hotline Spring Tour.

Music Existence had the chance to catch up with Sam Lee, the other founding member and guitarist of Magic Man.

ME: You guys are currently on tour with The Griswolds and Panama Wedding, how has that been?

SL: It’s been amazing. The sets have been really good, great crowds, great energy at all of the shows. And it’s awesome to tour with Panama Wedding again, they’re some of our good friends and we’ve toured with them a couple of times before, so it’s sort of like a nice little reunion.

ME: What is your favorite song to play live?

ME: Your song “Paris” really kind of helped you guys catapult into the music scene…What is the importance of that song to you and Magic Man, and how do you want to grow from it?

SL: Obviously that’s one of our most successful songs, so it definitely will always be really important and we’re probably going to play it at the end of the set for a while. Alex wrote a lot of the lyrics about his time in Paris when we were in college about the change of being in one sort of magical place and then coming home and kind of, uh, having things be a little different when you come home. The song is a special song and I feel like it opened a lot of doors for us, and especially for the first album, writing that song was kind a key to the record and helped find the style we wanted to go with for the album.

ME: So you guys are currently working on a new album, how is that process coming along?

SL: We’re almost done! We finished basically recording and everything…we’re feeling really good about it. I’m really excited about it and we can’t wait to get it out into the world. We don’t have a release date or anything yet, but I’m really hoping we’ll do that soon.

ME: Your last album, Before the Waves, was very synth and pop heavy, is this new album going to be like that as well?

SL: Um, yeah, in some ways. I feel like we kind of tried to take what worked from Before the Waves and just kind of beef it up, and not try to stay only in that lane and try to diversify the grooves and styles…definitely try to give it more of a live feel–more drums, more guitar. Definitely similar ingredients but hopefully kind of like a different recipe.

ME: Since the time after Before the Waves came out, three members left the band. How did this affect the way you went about creating the new album? Did this help develop or grow Magic Man?

SL: Um, well so it’s a little tricky because Alex and I have kind of been the main songwriters for the band since the beginning, so in terms of the songwriting process, that itself didn’t really change that much. It’s mostly the two of us in the studio making the songs and everything, and the other guys are obviously essential and really important to the band almost more on the live side. But obviously, you know, when three of your best friends leave the band to go on and do other things, it changes things. Luckily we have three great new musicians that are playing with us now–we’re having a great time on this tour. They’re amazing–they’re all really really talented and playing really well.

ME: Going along with your songwriting process, how does that work? What are your inspirations?

SL: It can be anything really. Sometimes you’ll have a little melody stuck in your head and you record it and that will be the basis of something. Alex and I write in a bunch of different ways. Sometimes he’ll come up with an idea and come to me and I’ll work on it and spit it back to him. Sometimes we’ll sit in a room together with a guitar and start from scratch. It really depends, kind of whatever works. I don’t like to limit ourselves to one method or anything like that.

ME: One thing I noticed with a lot of your songs is that lots of them are named after places: “Texas,” “Paris,” “Chicagoland,” “Nova Scotia.” Are places and traveling a big inspiration for you guys?

SL: Yea, travel is obviously a big part of the band. We started the band and first writing our songs when we were traveling together in France in college. Obviously with a band you get to travel with them and see a lot of different cities. I love to travel. It’s definitely a source of inspiration to us. In terms of the song titles, it’s um, the same way someone would write a song about a person. You really capture a lot of emotion and a lot of feeling about a certain place by writing about that place or travel or something like that…It’s sort of a metaphor for a time or a feeling or a particular memory.

ME: Recently you guys collaborated with The Knocks on their new album with a song called “Cinderella,” how was that experience collaborating with them?

SL: We’ve known The Knocks for a while now, we played some of our first shows with them. We’ve been friends for a while and have always talked about doing something together, so it was awesome to finally make it happen. It was great–we spent a couple days in their studio and worked on the track together. It’s always fun collaborating with artists because you kind of do things you might not necessarily do or try in your own music. I’m really proud about how it turned out.

ME: Going along with the whole collaboration aspect of things, you guys also just released an EP of remixes for Before the Waves. What made you want to make this remix album?

SL: Well part of it is simply because some weren’t online or were taken off of SoundCloud, and we just wanted fans to be able to hear them–we think they’re all pretty cool. It’s always great to hear remixes of your stuff and to hear different interpretations. Obviously we’ve heard the songs more times than anyone probably. It’s not that you get sick of it but you hear it over and over again, so getting a fresh take on a song is awesome because sometimes it gets you re-excited about something maybe you were a little, not bored of, you know, but it didn’t feel like the most new, fresh thing to you because you heard it so many times.

ME: What can fans expect from your current tour, Hotline Spring?

SL: Yea, like I said we are playing a couple new songs, so they can definitely expect to hear some of those, we may add more as the tour goes on. We’ve got a couple neat little surprises and a cover we’ve been doing of Bruce Springsteen’s “Dancing in the Dark.” We’ve got a great new light show direct by our friends down in Nashville. In terms of the show, it’s the same Magic Man show–we really like to bring it and bring the energy, have a big sweaty dance party up there. We love it when the fans are singing along and dancing along, and getting into it as well.

ME: What are your plans for after this tour?

SL: I think the plan is basically to kind of get everything squared away for the record and hopefully hit the road again. Maybe start doing some promo for the album and start getting that going. Yea, just trying to get back on the road as soon as possible.

SL: I guess in general at the shows we love seeing fans interact with the music, and kind of giving us the energy to perform yet. I guess in general “thank you” is probably the big message, like we couldn’t be doing this without any of our fans and all the support we get. I feel like we have the best fans in the world. It’s sort of cliche, but we really wouldn’t be here without all their support so “thank you” is probably the most important message.

Magic Man recently played the Metro in Chicago: Check out my coverage of the show here!

To stay up-to-date with all things Magic Man, check out the links below!

Photojournalism major at Columbia College Chicago. I love capturing the realm of humanity, and plan to do so the rest of my life through photography, writing, and travel.
@erinbbphoto
Previous Magic Man at Metro in Chicago 04/23/16
Next Gallery: Apocalyptica at Starland Ballroom in Sayreville, NJ 04.23.16