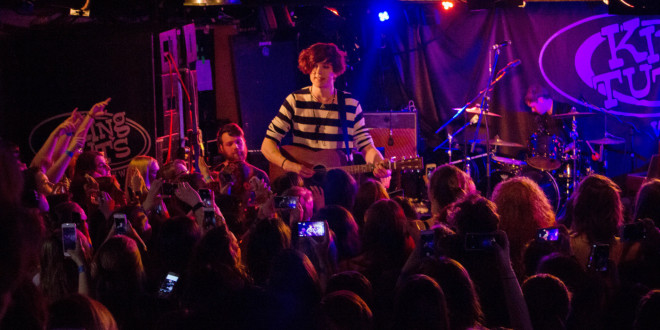 Bry and Support Orla Gartland in Glasgow’s prestigious King Tut’s Wah Wah Hut was a very amazing experience that was shared with some very special people, from securing a place outside early in the afternoon to the hospitality of the venue staff through the day when show time rolled around, myself along with the rest of the fans were excited. But first we got to witness the truly wonder Orla Gartland who I was very surprised with. As someone I had never listened to I didn’t know what to expect from her but I really really enjoyed it.

Her voice was gorgeous, so rich and so smooth, she was also an incredible performer and for those of us who didn’t know who she was, she threw in a wonderful little mash up of some popular songs that got everyone singing and clapping long and it was a wonderful little thing just to set the crowd up but a very notable part of her performance was when she sang her song ‘overthinking’ where she spoke before about how she chronically overthinks.

As she launched into the song I was left with my jaw on the floor as she began to rap fast, amazing relatable lyrics then powering through the chorus with a voice that left shivers down my spine. She was amazing. She had a lot of humour with the crowd as well, stood behind her were the letters of hr name make up of little letters that lit up and she told a little anecdote about having to order the letter O R A L that sent the whole crowd into fits of giggles. Admittedly it took a little while for the penny to drop with me so I laughed after everyone else. Drawing attention from Orla herself but it was all in good fun and everyone had a great time in the cosy venue just having a good time with her.

Then it was time for Bry. A big upgrade from his tiny show last year in Glasgow’s audio which was just him, his guitar and his wife Candice on keyboard. This was something totally different. For me this was my 8th time seeing him, from some multi act shows to big YouTube events to T-In The Park and I knew that no matter what it was going to be amazing but I didn’t know I would come away thinking it had been the best one of his shows I had been to.

When the house music died down and we heard the intro music begin I couldn’t help but roll my eyes at the cheesy sound of Eye of The Tiger but my stomach started to hurt with laughter when there was a fake American accent over the song, introducing Bry, after his controversial name change the announcer listed the many things he has been called (including Brian by his mother) and it was such a fun and hilarious way to open up the show. But he kicked off with a bang. With a revamped version of the beautiful Your Life Over Mine and I knew the night was going to be good because I had already teared up a little at the first song. The crowd was incredible it was so high energy which is something I have to say I’m not used to at a Bry show, everyone was jumping, sweaty, dancing and singing along.

I got an massive sense of pride watching him preform to a nearly full Tut’s, putting all the energy and passion into his performance, the full band giving Bry a sense of fullness, like his sound was complete. I couldn’t fault his performance. The very lovely ‘hype man’ Gerry kept the crowd going crazy. Bry explained the reason behind all his songs and it was great to get that in site into what they were written about and of course the running joke that they songs were written about his best man Gary (not wife Candice) brining a smile to everyone’s face.

I often found myself ugly singing at the top of my lungs during the show, just showing all the love and support for Bry and the band on stage. A high point for me was Bry preforming disarm a song he wrote about meeting your idol and it not being the way you expected it to be and them being a bit of an arsehole and to be able to reach these songs on a personal level was amazing, not only is it one of my favourite songs but one I related to as well. It was great to stand back and take in the atmosphere of the venue. Bry’s voice sent shivers down my spine and the band just made it all the better.

Now from previous nights I had been seeing photos of what looked like Bry crowd surfing and I had a little chuckle to myself because Bry is a very very tall human and with his audience being a lot of young ladies and men it was going to be difficult, but luckily for us the whole crowd surfing act was staged, we spend a good 10 minutes getting into position

(males at the front of course) to hold Bry and Orla up while they took a big crowd photo. It left everyone in stiches of laughter. Bry himself had a beautiful relationship with his fans and it was clear from the start of the show to his meet and greet at the end.

As the show went on we got given the go ahead to go crazy while Bry preformed his brand new song from his debut album. Don’t Go Alone, something different from anything Bry had released before but it was still received amazingly by the fans and that learned the words in such a short space of time. I just danced and sang my little heart out as did everyone around me and as the end of the concert approached I heard the familiar chords of Adventure Time, now as someone who has seen this song preformed so many times I can’t stress how incredible and different it was compared to the first time I’d seen in, the last chorus of the song was where it really hit home, Bry came down to the crowd and encouraged them to sing, it was a beautiful moment and it must have been so humbling.

Once he was done and everyone gave a massive applause Bry made the little joke of ‘this is the moment where I’ll leave the stage and pretend I have no more songs they you’ll do your little cheer and I’ll come back on’ And when he did come back on we all truly rocked out to him preforming Care, one of Bry’s well-known songs and he looked so happy, like he loved every moment of the performance, he put all his time, love and energy into that music and I can honestly say he is one of the most passionate performers I have ever had the pleasure to see live.