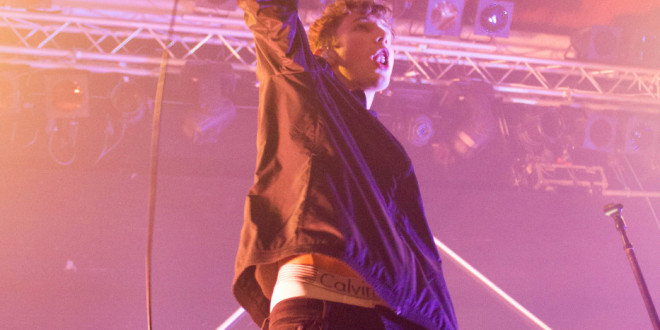 Knowing tonight was so hyped up I went with nothing but high expectations for the show. After looking through social media to get a little idea of the set list I was excited. We arrived the venue to see the queue right down the street; everywhere you looked there was ‘TRXYE’ sweaters. The small groups of people quietly singing songs from Troye Sivan‘s debut album ‘Blue Neighbourhood’ amongst themselves, getting ready for the show.

The venue was sold out so there was a buzz from everywhere in the room, even the balcony and I have to admit as soon as support act Astrid S walked on stage and her band began playing I knew I was at a Troye Sivan concert. With a sound very similar to that of Troye’s she fit right on the bill, soft, melodic but then with a good kick of bass and drum in there which sent the crowd wild.

It was great to see them responding to the support to well, hands in the air, dancing, singing what little bits of songs they were picking up. That isn’t always the case of supports but they looked like they were having fun the whole way through. Astrid, who us from Oslo told us it was her first time playing in Glasgow and she was given a very warm reception. Her voice was amazing, somewhere between Halsey and Sia.

But nothing could have prepared the crowd for what was about to happen. I can honestly say that the moment the incredible back lights lit up I was in awe of the stage, ‘here we f*@#ing go’ being chanted once again like a typical Glasgow crowd and the small silhouetted figure on stage opening his mouth on stage that stirred an ear shattering scream out of the crowd. It was beautiful, their passion as Troye launched straight into Bite every single word of the song being sung back at him.

His fans were amazing through the whole show but none more than when he began to play Suburbia. Ever hand in the air was in the room holding a blue glow sticks, a mass fan project organised on twitter. It was absolutely beautiful to see it lit up and it was evident Troye was taken aback by the amazing gesture. He made sure throughout the whole show to remind his fans that they were the reason he was there preforming his music all the way from Australia.He also opened up about his struggle about what he wanted to do with his life when he was younger and about his sexuality and it was very touching to know he trusted his audience and fans enough to share that with them. He also performed an amazing tear jerking rendition of Amy Winehouse’s Love is a Loosing Game

When I heard the familiar openings to his song Happy Little Pill I was ready for the real excitement, as his first song he released after his YouTube days this one was iconic. If he so chose to, he wouldn’t have even needed to open his mouth to song, the sound of the crowd was even louder than the band. It was incredible.

I could not help myself but dance through the whole show, his sound, his voice, the band, all of it just gave you an amazing feeling and the fans made you feel so included and loved at the show. Lost Boy and Youth, I can honestly say I’ve never heard a louder crowd in my life. The loud belting of ‘MY YOUTH MY YOUTH IS YOURS’ could no doubt be heard outside the venue. It was an absolutely incredible way to end the show. When the man himself took his bows I was almost deafened by the screams and applause. Overall Troye put on one of the most incredible shows ever and he is someone I’d love to see again.