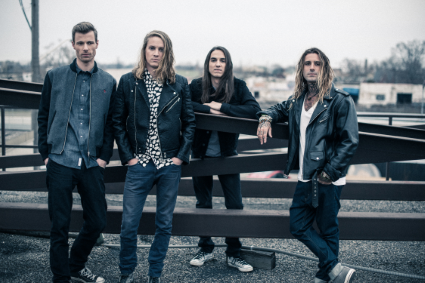 Toronto, Ontario has quite a history of breeding bands that keep to their values amidst success. For alternative quartet Bleeker (formerly Bleeker Ridge), the pursuit of music is a joyride—a consistent streak of high times, monster performances, and artistic progression that isn’t bound to end anytime soon. Regarding their career perspective, vocalist Taylor Perkins stated in a press release, “You cannot let it become a job. You have to look it at the way you did when you started out when you were 13. We never thought of making money. We were only about making music. We are still doing that. Anything else will make you miserable. If you cannot have fun in rock ‘n’ roll and music, where can you have fun”? Indeed, all of Earth’s musical creatures most probably wonder the same.

The band’s first EP under the Bleeker name is just as the band makes it: totally fun, all the while maintaining an important sense of discipline and direction. Starting off on a fresh slate can prove difficult, especially following a three-year lapse from a debut album. However, the EP’s opener, “Highway,” does much to solidify the band’s longevity. Its life-on-the-road concept, while far from anything new, pertains to simply regarding every experience—whether positive or negative—as a stepping stone in life. Not only does it have a great hook, a crunchy tone, and a solid low end; it had earned a response more tremendous than any of their material. “Free” expands on that outlook, albeit a more straight-ahead rocker. I felt like I was sent straight back to a more prominent time in modern rock, when bands like the White Stripes, the Vines, and the Von Bondies dominated the airwaves. The song takes a pop lyric approach, much like the aforementioned hit makers, addresses the release from a corroding relationship to assume independence. Even when such circumstances force desperate measures into play, there is still a surge of self-confidence to assist in pushing forward. I found the chorus to be a bit better executed in its riff and vocal delivery, which convinced me to check out the EP further. “Erase You,” though containing a short main riff, experiments with integrating grunge textures and harmonics. It was Perkins’ shifting vocal tones that generally sold me, as they ranged from psychedelic 90s harmonies to peak-era Chris Cornell belting. The penultimate track, “I’m Not Laughing Now” has an interesting buildup, starting with a simple toothbrush tap and transitioning into the conventional kick and snare. There’s a lot of single potential in its streamlined chord progression, even though it still emanates the band’s distinct alternative identity through and through. For some reason, it sounds more natural as the closer, while the final track, “Where’s Your Money”, seems like it should go earlier from a pace perspective. Otherwise, its swaggering rhythm section, Leo Sayer-type falsetto, and buildups between each of the phases are showcased to substantial competence.

Overall, the Bleeker EP successfully supplies a tried and true idea: those who stick to their core aesthetics are able to produce an album without loss of luster or audience. All five songs exhibit a unique hit factor, instilled by searing riffs, fluent use of vocal dynamics, and ultimately, universal lyric appeal. I have faith that this EP will catapult the band toward recognition on a larger scale than ever thought possible.

I come from a family who is passionate about all things music. I learned to sing at an early age, and by 13, had my very own Fender Strat guitar. I tried my hardest at learning all that I could. Because I was born with cerebral palsy, I had to teach myself an adaptive playing style. I learned to write and record my own music, despite these difficulties. In college, I started making great use of my writing abilities by reviewing music, as well as copy editing. I guess it's best to stick with what you know, while welcoming a fair challenge at the same time.
Previous Hellfest running order
Next Album Review: THE 69 EYES – Universal Monsters (Out 4.22.16)