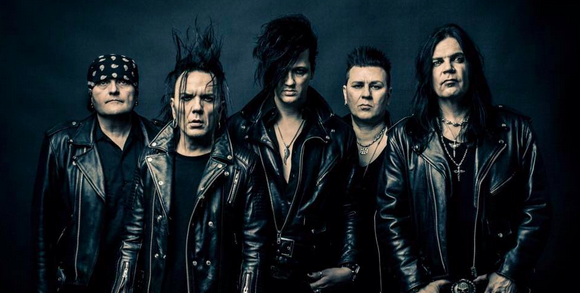 Teased as an album that could have come after 2002’s Paris Kills, Helsinki’s vampires—THE 69 EYES—are back and set to release their 11th album, Universal Monsters this Friday via Nuclear Blast.

Marking a return to Paris Kills and Blessed Be’s producer, Johnny Lee Michaels, THE 69 EYES’ signature ‘Goth’n’Roll’ style is as present as ever across tracks that somehow bring to mind a darker Elvis, David Bowie, or even Billy Idol. Universal Monsters is the epitome of the distinctive blend fans have come to crave, and it does not disappoint.

Another area the record succeeds in is creating a mood. The landscape may change (as a result of delightfully diverse lyrics, and layered instrumentation), but the overall theme is one of “gothic chill.” It’s easy to picture a centuries-old vampire taking a winding road trip across time and lands that may or may not actually be next to one another on a map. His vintage Harley glides along a path guided by the moonlight peeking through dense patches of forest, while the wind generated by the motion ruffles the long, black hair that frames his pale face. It sounds weird, but it makes sense when listening to Universal Monsters as a whole.

Welcomed in by the sound of distant church bells ringing, opening track, “Dolce Vita”—or sweet life—showcases Jyrki69’s low-pitched vocals as they sensually slide across lyrics before taking a hard-edged twist in the irresistible chorus. Technically solid drums, bass, and guitar (courtesy of Jussi69, Archzie, and Timo-Timo, respectively) contribute to a fast-paced background. The complexity of this setting is only heighted by Michaels’ light keyboard strokes used to full advantage at choice moments. The gloomy atmosphere builds in intensity to feature a crushing solo from Bazie that would be worthy of any ‘80s metal band.

The seventh track, “Jerusalem” marks a pilgrimage for Helsinki’s vampires, as well as a standout track for Universal Monsters. An ode to the Queen of Sheba, Jyrki69’s vocals float atop a synthesized backdrop paired with steel-stringed acoustic guitar work and pulsing bass. All of this adds further weight to poignant lyrics like:

“Going down to erase my sins / And for a new beginning / Going down where all faith lives / And where the walls are wailing” and “All the kings and their queens / Princes and princesses / When you get peace down here / Thousands of years disappear.“

The song ends with Jyrki69’s croon alternated with a Middle Eastern hymn, pairing the new with the old, and contrasting the symbol of an empty soul with its longed-for destination.

Universal Monsters is a solid album full of good music—with “good” being the operative word. There is not much to make one pause and go, “Wow.” At the same time, there is nothing on the album that does not work. Rather, when deconstructed, every component of each song is performed exceptionally well. It is hard to point this out as a potential flaw when it seems more the mark of a band experienced to the point of operating as a well-oiled machine.

In closing, Universal Monsters is an above-average listen for those who like their rock with a touch of gothic gloom or are already well acquainted with the band’s signature sound.