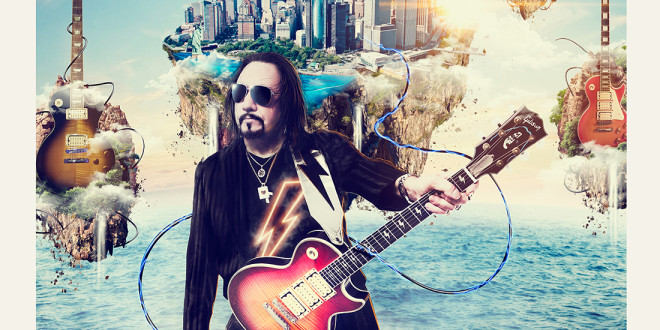 Ace Frehley’s newest solo record, entitled Origins Vol. 1 has recently made its way to store shelves. The album’s name pays tribute to the late great Jimi Hendrix and other legendary artists from the past several decades. Everything began for Ace Frehley back in December of 1972 when he saw an ad in the Village Voice: “LEAD GUITARIST WANTED With Flash and Ability. Album Out Shortly. No time wasters please. Paul.”

After all of these years in the music business, Ace has proven himself to be an accomplished musician. He continues that trend on his newest solo album where he does covers of Cream, Jimi Hendrix, The Troggs and Thin Lizzy to name a few. On Emerald, Ace teams up with fellow guitar legend SLASH. The guitar work of SLASH and Ace on one track is absolutely mind blowing. This is evident, while the two exchange guitar solos and go off on what is nothing short of a musical adventure into guitar wonderland.

Frehley also pulls out older KISS material on his album including Parasite. Parasite was released in 1974 as a track on Hotter Than Hell. Even if it’s not one of the most popular KISS songs, Ace does a killer job of rehashing it on his Origin Vol. 1 album with no other than Rob Zombie guitarist John 5. The beauty of this song is the vocals, which are done perfectly by Ace. I feel this song fits perfectly on the album as it is a harder track. His genuine guitar playing joined with John 5, makes this track a stand out. Most people thought that Ace would’ve never have done any KISS material, but according to Ace, they’re all good friends. Ace said this about his relationship with his fellow KISS bandmates “We’ve always been friends. The press seems to amplify negativity. I guess it makes good copy.”

Talking about his album, Ace said “I’m really thrilled with the whole thing”. He also indicated that second Origins volume could be released in the future. “I’m excited about it, and I think there’s a song on here for everyone.”

In conclusion, this album is a solid effort by Ace Frehley. It’s got plenty of Ace’s guitar power with a talented band backing him. The guest appearances also make for a real treat. It’s great to hear Ace play homage to many legendary artists that he found to be inspiring to his own career. Keep your eyes peeled for Origins Vol. 2 and future tour dates.

For more information on Ace Frehley:

Resident Music and Photography addict from Northern, New Jersey.. USA. Got into both music and photography at a young age.. it's been history since!
@billtnj
Previous Album Review: Vaudeville Etiquette – Aura Vista Motel (Out May 6)
Next Gallery: Orla Gartland King Tut’s Glasgow 17.04.16