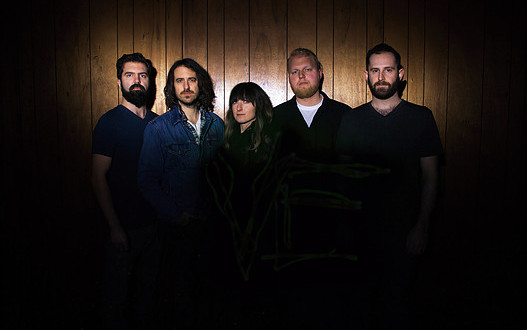 Vaudeville Etiquette puts a refreshingly Northwestern spin on rock and roll, offering something beyond its contemporary strum-by-numbers permutation. The self-described psych-folk/americana quintet’s home atmosphere of Seattle, Washington has indeed worked in their favor. While the city has long garnered an unusual reputation for its lack of proximity, its rain tendencies and the occult, its creative individuals seem morally obligated to brainstorm outside the box. This notion may seem confining in the broadest sense, but it actually pushes those, including Vaudeville Etiquette, to hone their craft on a regular basis.

Consider their second and latest album, Aura Vista Motel, a testament to such circumstances. What is ultimately produced is a two-year culmination of hauntingly hard reverb rock sprinkled with sporadic country and jazz elements. As the story goes, said motel initially proved a prominent resting spot for then-thriving middle class travelers. Nowadays it is all but abandoned. With the middle class dwindling consistently in the past 30 or so years, the motel’s appeal has since been tarnished by a plethora of violence, hard drugs and prostitution. However, it has also received newfound purpose as a space to write, rehearse and experiment limitlessly—a space the band has christened ‘the Vaudeville Etiquette headquarters’.

The album begins with “Cross-eyed Crazy,” its carrier single and an anthem that captures the hysterical, unbridled fun of a pleasurable experience. Right from the first few measures, listeners are treated to a deep, party-fueling rhythm accentuated by early 70s-styled southern rock. The main riff is a bit rough on the edges, but is nonetheless top-notch when paired against the harmonies of vocalists Bradley Laina and Tayler Lynn. I was especially fond of Shawn Simmons’ two-inch tape recording, which brought out a distinctly bittersweet kind of purity of the instrumentation. A simple chorus of ‘wo-o-o-oah’ caps the songs excitement, sounding impactful enough whether on its own, or by its piercing through backing textures of sweet twang. The chorusing-laden guitar solo was an interesting contrast, yet gave the song a fuzzy underground feel reminiscent of Seattle’s pioneering alternative period. Next up is the title track, a strong candidate for a mainstream country chart-topper. This song solidly observes the aftermath of a drug trip, the user slowed to a trudging pace. After experiencing a seemingly eternal ride off of cocaine, the crash is heart-rending, bringing back anxieties of a bleak future on the horizon. Even for the song’s streamlined structure, the progression still did enough to focus on the message, and the amount of heart in the vocal delivery is admirable. Any which way, it is sure to bring them airplay and success. “Damn Lovely” dips to a waltz, and its darkness is better nuanced by its instrumentation. However, it is a lyrically positive piece, celebrating the sheer unification of everyone whether they are old or young. Her wide range is a bright, dancing flame amidst its moody atmosphere. This vocal utilization by Lynn is reminiscent of another Seattle singer, Carrie Akre—less on the gritty side but exuding plenty of soul and crucial in emphasizing the bond to be shared by all of humanity. Laina exhibits equal presence in the cuts to follow, each contrasting yet finding common ground. “Bridges” is generally mournful and centers on a bout of pronounced separation anxiety, while “Tipping Point” is an edgy blues-driven tune about the desire for such separation, in an undermining fear of becoming emotionally unhinged.

As I reached the latter part of the album, I made note of its consistent pacing, as well as greater focusing of content and sonic elements. There’s a prominent western edge in the main guitar bit of “Set It on Fire while the song’s lyrics spark images of sand winds trailing through rustic, dilapidated scenery. In essence, they describe how widespread fickleness puts society on an aimless path toward destruction. The combination of reverb guitar and percussion creates the ideal backing for the eventual chaos to ensue. Ultimately, the heaviness of the guitars compact into an explosively raw and dissonant solo, which pleasantly surprised me. “Empty Hands” deals with a similar excess-based scenario, but emphasizes moving forward through patience rather than aggression. The light acoustic nature transcends the gloom of the previous songs, while its harmonies maintain tightness throughout. This time the reverberation enveloping the guitar is sparse and considerably gentle, suggesting a hope for reunification. Conversely, and despite constant tenacity through conflict is to part ways, the ultimate decision is to part ways (“The Leaving Song”). Underneath the sweet harmonies of the song, there is a pained melodic foundation that validates the transition in starting anew. The notion that time heals a broken heart is put to the test, and feelings remain difficult to conceal despite the leap toward a better life.

Overall, Aura Vista Motel offers so much more than a modern country rock album ever could. The initial conceptual premise is the dissolution of the hotel itself, and digging deeper, the listener gets a down-to-earth insight into modern-day society and its countless relationships that unfold. This is a true follow-up to Debutantes & Dealers in every aspect, and Vaudeville Etiquette is certain to evolve into something the mainstream will willingly embrace.

I come from a family who is passionate about all things music. I learned to sing at an early age, and by 13, had my very own Fender Strat guitar. I tried my hardest at learning all that I could. Because I was born with cerebral palsy, I had to teach myself an adaptive playing style. I learned to write and record my own music, despite these difficulties. In college, I started making great use of my writing abilities by reviewing music, as well as copy editing. I guess it's best to stick with what you know, while welcoming a fair challenge at the same time.
Previous Album Review: Cellars: Phases
Next Album Review: Ace Frehley – Origins Vol. 1