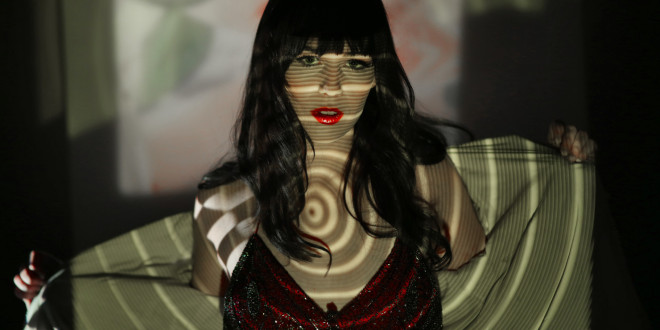 On April 15th, 2016 Cellars, aka Alle Norton, released her LP Phases a collection of electronic and pop that will surely draw comparisons to Madonna and Lady Gaga.

The album kicks off with the two best tracks on the entire record which set the tone for the rest of the music that follows. “Stir Crazy” has a dazzling futuristic introduction that feels as if one is swirling around the cosmos. Norton’s vocals are a bit smoky here to match the hazy feeling of the song. It’s certainly something that one can dance to, but it has a much more darker feeling to it, in part because of the slower pace. Think Metric’s “Black Sheep” but with a more experimental vibe. It’s hypnotizing in every way possible and sets the bar high for the rest of the album.

Next up is “Do You Miss Me,” which right out of the gate has a pulsating beat that any fan of the synth-pop era of the 80s will find themselves attracted to. “Recently I found myself in love again,” Norton croons in a way that is reminiscent of the alternative/pop duo Tennis. This particular tune boasts the most infectious chorus on the LP, with engaging lyrics like “do you miss me?/I dare you to kiss me.” This attitude that Norton puts forth is refreshing and helps set her apart from other female musicians currently on the pop charts. It’s lushly produced and with Norton’s ethereal vocal performance “Do You Miss Me,” is one of the brightest musical spotlights of 2016.

“Still In Love,” is undeniably laid back and chill and is the first real ballad to appear on Phases. It tells the story of a woman who knows she is being cheated on, but still retains the hope that she and her love can work things out. The Madonna influence on this particular tune is blasting at full force, but it’s never derivative as Norton brings her own special talent to the song. Though the track is over five minutes long, it never drags which is an impressive feat as it captures and then holds listeners attentions throughout the entirety of the song.

Also of note is “Nighttime Girl,” which has a groove like no other on the album and contains hands down the best lyric on Phases “sometimes I’m feeling like the strangest girl/nocturnal woman in a daytime world.” This song feels as though it’s something Gwen Stefani could have written and churned out especially because of the attitude that Norton puts forth. It’s like the pop goddesses of the last few decades have all sat inside of Norton dormant, and she is now letting them all out to play. But with her electronic approach, Norton carves out her own pocket of alternative/pop, making the album completely her own.

Phases is a well rounded record, but what is most admirable about it is that just when listeners may think they have figured Norton out, she throws some musical curveballs at them in a Lady Gaga fashion. Never one to shy away from pushing herself, Norton isn’t afraid of getting experimental and tinkering with her songs to make them stand out. “Nervous” uses a male voice to interact with Norton, and she also talks/raps some of the verses which could be compared to Blondie. It still has that dance groove that Norton is known for, but the little changes help make it an unforgettable track. “Curse Your Love” makes use of sound effects of thunder, lightning, and rain, to bookend the tune. It’s dark but powerful and is bound to cast a spell upon listeners, as Norton uses all of her tools in her reach to create something memorable for her audience. At just over three minutes, the only problem with “Curse Your Love” is that it goes by entirely too fast.

From start to finish Norton showcases an image and music that is sure to gain popularity in the pop scene of today. Sometimes the songs do tend to blend into each other making them less distinguishable, and on a rare occasion some of the longer tracks go on for too long, but putting that aside Norton has created an album that will make her a household name.