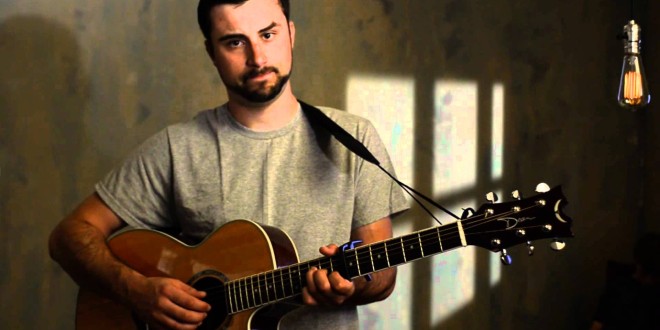 The third album from Northern California based singer/songwriter Bobby Jo Valentine is quite the memorable event. Fox Eyes, Whale Heart signals a new period of artistic growth for Valentine as his lyrical vision. The bedrock strengths evident on his debut A Place to Belong and his sophomore effort Home remain consistent on the new album, but there’s a discernible deepening of his poetic sensibilities that elevates some of the new songs to an entirely new level. It is no stretch at all to claim that this is Valentine’s best release yet. He’s found the optimal balance between pop sophistication, folkie clarity, thoughtful maturity and youthful vigor.

There seems to be an attempt with this album to likewise balance personal and commercial demands. Valentine stirs the musical pop some, but many of the new album’s twelve songs share the same essential musical structure. Valentine is definitely a fan of classic approaches – more than a few tracks are constructed around the slow build with a climatic chorus payoff. The album opener “Carry Me Away” falls into this camp. It has a solid musical foundation and makes all of the expected turns, but Valentine’s lyrics put a different spin on its clear pop pedigree. “Haunted House” has fantastic swinging drums and a blinder of a vocal from Valentine. The horn section once again punctuates the song with a great deal of added verve. The album’s title cut builds from a muted beginning and gradually brings more instruments into the mix until the song morphs into a striding folk rock jewel. Lively metaphors are strewn across the lyrics and Valentine breezes through their twists and turns with inspired confidence.

“Lion in Summer” is one of the album’s stronger pop oriented efforts and its thanks, in no small part, to the tremendous energy Valentine summons for his vocal. “Ever Since”, like many of Valentine’s songs, has a distinctly personal touch, but its obvious autobiographical leanings never get in the way of it resonating with listeners. Valentine returns to the slow build template for “Belly of the Beast”. It moves from a hushed acoustic opening into a gradual escalation, climax, and coda. It’s one of the album’s better songs thanks to a particularly nuanced Valentine vocal. “Only Beloved” coasts by in a charming fashion thanks to its jaunty bounce, appealing instrumentation, and a playful Valentine performance. “Ungrateful” is an unexpected gem near the album’s end and the first exclusively solo performance on the release. There’s not enough that can be said for Valentine’s acoustic guitar playing. There’s no virtuoso trip going on here, but he’s absolutely mastered how to bring his voice into perfect accord with the instrument. The breathtaking honesty of the song is its crowning moment.

“Something You Happen To” concludes the album perfectly. There’s a neatly dovetailed sense of conclusion coming from the song’s music and, specifically, its lyrical content and Valentine’s vocal does a superb job of winding things down. It is a final bit of unstated flourish at the end of a fantastic album. Fox Eyes, Whale Heart is one of the young year’s best releases in its genre and deserves widespread attention and acclaim.