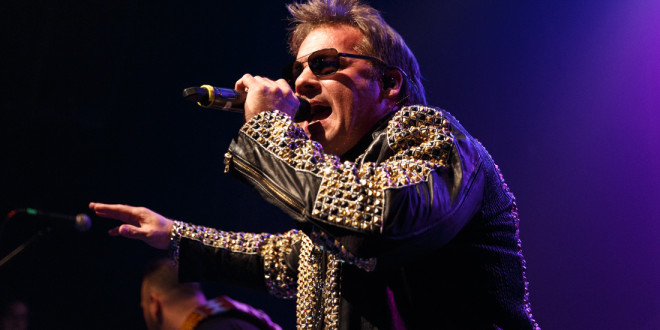 Gramercy Theater is one of New York City’s most well-known music venues. Last week, Gramercy Theater was home to the final stop of the Metal Allegiance tour. Metal Allegiance is not your average metal band by any means. It’s a group of friends who love to play music and each of them just happen to be fantastic at what they play. This run was nothing short of fabulous, including Alex Skolnick (Guitar), Mark Osegueda (Vocals), Chuck Billy (Vocals), Mike Portnoy (Drums), Bumblefoot (Guitar), Mark Menghi (Bass) and Chris Jericho (Vocals). With the amount of history between all of these guys, I knew I would be in for a very special, unique show.

Chris Jericho was fresh off his Wrestlemania appearance and caught up with the band for the last two stops on the tour. Jericho has one of the best voices in the biz and he’s a ton of fun. Smiling ear to ear for the entire evening, he had no trouble tackling some of the biggest songs in rock n’ roll history. Chris sang lead vocals on Iron Maiden’s “The Prisoner”, Accept’s “Balls To The Wall”, and Van Halen’s “Runnin’ With The Devil”. While Jericho was flying around on stage, he jumped up on top of the side stage. Fans sitting in the VIP area got a first person view of Jericho signing. As Jericho finished up his singing, he grabbed a drink from the VIP area and took a sip. Awesome.

Other highlights of the evening included original material from Metal Allegiance, off of their self-titled debut album. Alex Skolnick and Bumblefoot are the perfect guitar duo… Both of them played the introduction to Dying Song, followed by an incredible exchange of chops between two amazingly talented guitarists.

A touching moment of the night came about when the entire band played on the edge of the stage for a fan in a wheelchair. Bumblefoot made the giant leap with his double neck guitar off the stage, to play right next to the fan. Skolnick, Osegueda, Billy, Menghi and Jericho lined up at the end of the stage, somehow not falling off the stage. Together they created memories that will forever last a lifetime and played a killer version of ACDC’s “Whole Lotta Rosie”. No one inside the venue that evening will ever forget it, that’s for sure.

The encore was an entire band effort and caught the crowd by complete surprise. Eruption broke out in the crowd as they heard the first few notes of the famous Metallica song, “Seek and Destory”. What made this special was having everyone out on stage. Chris Jericho, Chuck Billy and Mark Osegueda exchanged verses. At one point, Mark Osegueda ended up in the arms of Chris Jericho. To top off the encore, band members from the opening bands came up on stage to prank the boys in Metal Allegiance.

If Metal Allegiance ever.. and I mean ever is coming through your area on a tour, see them. Don’t question yourself, do whatever it takes to make the show. There were so many highlights and memories from this show, that I could probably write a book. You won’t get another chance to see such iconic musicians pay homage to some of the biggest and most bad ass bands in the history of music.

Resident Music and Photography addict from Northern, New Jersey.. USA. Got into both music and photography at a young age.. it's been history since!
@billtnj
Previous Gallery: Funeral For A Friend at the O2 ABC, Glasgow – 11.04.16
Next Haven’t heard storytelling this good since Nas! Here’s Ervin Mitchell’s Space Cowboy (Part 1)