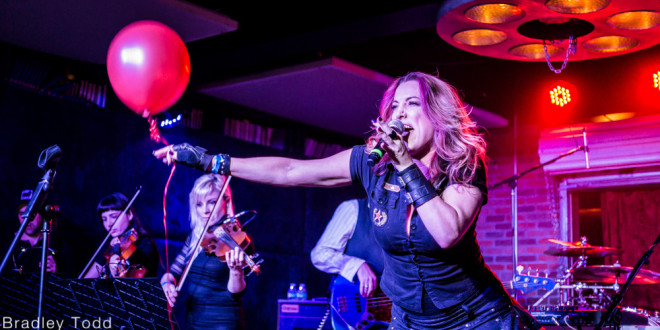 Jam nights by professional musicians are alive and well in Hollywood, a prime example of that being the recurring Wednesday night event called Soundcheck Live at the Lucky Strike music venue/bowling alley located at Hollywood & Highland in Los Angeles.

Every Wednesday night a rotating cast of professional musicians, from well known 80’s hard rockers to lesser known, but equally talented touring and session players, join Lucky Strike’s Soundcheck Live house band, who has their own impressive resume of professional gigs, ranging from playing with Avril Lavigne to Alice Cooper.

The musical selections are wide ranging and cover many genres, from metal to pop…often with horn and string sections joining the traditional guitar/bass/drums/keys to round out and complete the sound. There is a little bit of something for everyone in attendance.

Current structure for the event consists of 3 sets throughout the evening, with frequent lineup changes from set to set, and even within sets! The cast of visiting musicians rotates from week to week, with some confirmations usually occurring via Lucky Strike’s Facebook page a couple days before the show…but pleasant surprises do occur! In the short time I have been following the event, it has hosted members of Cheap Trick (on the actual day they found out they were being inducted into the Rock & Roll Hall of Fame!), guitarist extraordinaire Nuno Bettencourt (Extreme and Rihanna’s touring band), Sebastian Bach (Ex- Skid Row), and John 5 (Rob Zombie) and The Creatures, etc…

Soundcheck Live is a great idea and a ton of fun for any music lover looking for some live action on a Wednesday night on Hollywood. Event admission is free and only requires an online RSVP, which can be linked to through each weekly announcement made on Lucky Strike’s Facebook page. In addition to music and drinks, Lucky Strike also has a full gastropub menu…and the sliders were great 😉