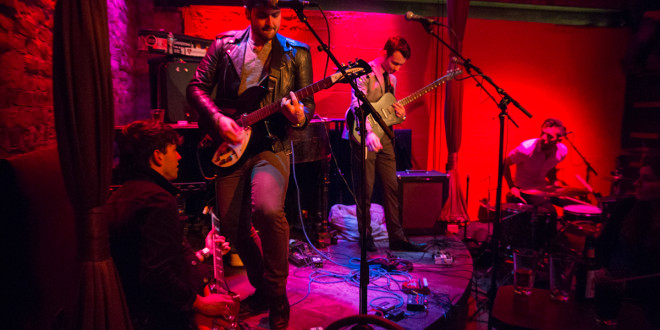 Bathed in vibrant red lights with a hint of a black accent, The Living Statues, who closed stage one of Communion’s musical showcase at Rockwood Music Hall in New York City on April 5th, 2016, looked as if their signature album art color scheme had come to life.

Taking the intimate venue’s stage at eleven p.m, frontman Tommy Shears, decked out in a leather jacket, greeted the crowd and introduced themselves as a band from the Midwest. Energetic and brazen, they kicked the show off with “Extra Day,” a song whose music video premiered on Entertainment Weekly’s website in 2015. Raucous in the best way possible, it set the tone for the next forty minutes.

The crowd was enthusiastic cheering and screaming after every song, surely making the band feel welcomed on their first performance on the east coast. Every member of The Living Statues, with their individual style, carved out their own distinct moments of rock n’ roll glory. Drummer Chris Morales was set up beside the tiny stage, and while the main focus was set on the three centered members, it was impossible to ignore the amount of sheer talent and all consuming electricity that emanated from Morales, pouring out blood, sweat, and tears from his soul into his performance.

Bassist Alex Thornburg, in a stylish tan suit, charmed the audience with his frantic strumming and killer attitude, in contrast with his clean cut look, which perfectly encapsulated the modern yet retro vibe of the music. Shears interacted with the crowd, telling quick anecdotes, at one point wondering aloud how a boy from Wisconsin had ended up all the way in New York City, engaging the audience and giving their set a more personal feel that fit the setting. Lead guitarist Zak Rickun, dubbed “the cute one” by Shears, had the kind of chemistry with the frontman that any band would sell their soul for, whether it was playing close, feeding off of each other to bring out the best performances in one another, or playful such as Shears sitting on top of a piano gently kicking Rickun.

In addition to “Extra Day,” from their EP Knockin’ the band treated the crowd to “Foolin’ Around” and the title track from the same album. Also on the set were their three latest individually released singles from 2015 including the more midtempo breakup tune “Blackout,” the peppy and infectious “All My Girls,” and “Valicity.” Rounding out the show were two new songs from the band including their soon to be released new single which had shades of The Beatles “Come Together” written all over it and an unrecorded song.

The absolute highlight of the night was when The Living Statues broke into their back catalogue and played the honest and grit filled “Maybe,” as a special request. Emotionally charged, Shears vocals never sounded so soulful, and with the rest of the band churning out epic performances “Maybe” produced a true chill inducing moment in time. Closing out the set was a rockin’ cover of The Zutons “Valerie” and the bands 2013 single Our American Cousin”, which was met to thunderous applause.

The Living Statues, who most recently made their SXSW debut, certainly made a lasting impression on the New York crowd and left residents of the city craving the day they make their return.