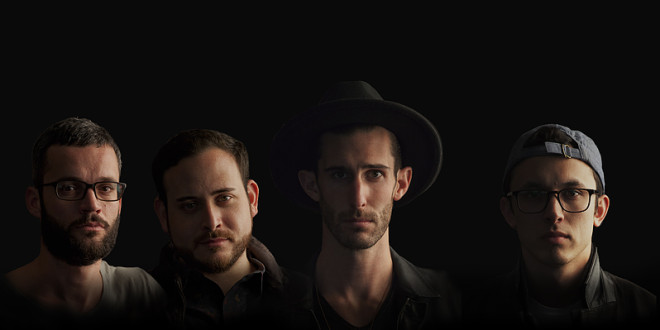 Southern California band, The Brevet, will kick off a tour this April and preview new music from their forthcoming full length album. The band has been praised for their Americana rock, sweeping orchestral tracks, gang vocals, unforgettable choruses and connective emotional lyrics. In 2014 they released the EP titled, CH. I, and will release their new full-length album, American Novel, later this year.

The Brevet passionately spills their hearts through cinematic sounds which has led to fans and critics labeling them as one of the first in the ‘Epic Americana’ genre. The four piece band is Aric Chase Damm (lead vocals, guitar), Michael Jones (backing vocals, piano), David Aguiar (backing vocals, drums), and Ben Ross (Bass, backing vocals).

Officially formed in 2013, Damm and Jones started making music together when they attended grade school in Irvine, CA writing songs on guitar and piano. While attending different colleges they continued their passion for music writing scores for student films and worked together during summers. The film work is where the band’s passion for big, sweeping, cinematic sound was born.

Eventually both Damm and Jones moved to Los Angeles and added drummer Aguiar and bassist Ross to The Brevet. The group is completely rooted in self-enterprise. As a true DIY band, they are self-produced and recorded most music to date on their own in places they could find from homes and apartments to community centers and strip malls.

The grassroots build for The Brevet’s music grew as they began getting attention for their sound with licensing agencies and music supervisors. Their music has been heard on TV Shows and Films such as Ron Howard and Brian Grazer’s The Good Lie (Warner Bros.), Ashby (Paramount Pictures), American Idol (FOX), NCIS (CBS), 90210 (The CW), Growing Up Fisher (NBC), The MLB Network, ESPN, and many more. The Brevet has played a number of large musical festivals and events such as SXSW, FloodFest, LIVE at Sunset Marquis, and The Rock Boat festival.

Last Fall, the Irvine Public Schools Foundation Spirit of Excellence recently presented The Brevet with the Rising Star award at the foundation’ gala in October (presented by by No Doubt guitarist and former Irvine resident Tom Dumont). A true tribute to a band that credits music in schools for their early start. Read more here in the Los Angeles Times.

The Brevet’s Damm discusses the band’s mantra and name, “I like to think that we have lyrics that we craft in a way that’s hopefully inspiring in overcoming certain obstacles, and our band name derives from the brevet rank, in the Civil War, [which] was a rank that was ceded for honor and merit. And, once you received that rank, you didn’t actually get paid any bonus for the things that you did. We’re doing it because it’s something we really love doing and we’re passionate about. And we hope to inspire listeners with our lyrical content.”