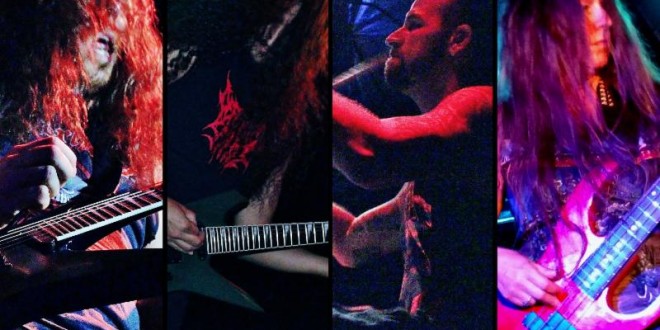 Elaborates guitarist/vocalist Matt Harvey of the latest track, “We’re totally psyched to bring you the first track from our new EP. This record, Dimensions Of Horror, delves deeper into the roots of our favorite Floridian, Chuck Schuldiner, and revisits the days of Scream Bloody Gore and the numerous Death demos. We wanted to do something rawer, nastier and more primitive than [GRUESOME debut] Savage Land and we hope you guys enjoy it and get into that gutter-level, early death metal head-space with us. So as you listen, close your eyes, imagine that you just got home from high school in 1987, ditched your Mongoose bike and ejected your brand new None Shall Defy cassette out of your Walkman to check your mailbox. Inside, there’s a sixty-minute TDK tape in the mail from an overseas pen pal with the Insanity 1985 rehearsal on one side and a dub of this new ‘mini-LP’ on the other. You steal some of your dad’s beer, light up a joint before your parents get home and pop this bad boy in the stereo while you watch a worn out, second generation VHS dub of The Beyond on mute on a 125-pound television. Now you’re ready to enter the dimensions of horror and enlist in the forces of death.”

Produced by the band and co-produced and recorded by Jarrett Pritchard at New Constellation RMP Studios in Orlando, Florida, Dimensions Of Horror is a gruesome salute to Death’s iconic Scream Bloody Gore full-length and once again features cover art by the legendary Ed Repka (Death, Atheist, Massacre et al). A six-song slab of grisly, bone-breaking death metal jams, Dimensions Of Horror continues the development of GRUESOME‘s homage to the founding fathers of the genre and proves that no matter the decade, old-school death metal is always relevant, savage, and irresistible.

Over the past year, GRUESOME has performed at numerous festivals worldwide, including Full Terror Assault Fest, Obscene Extreme America, and Netherlands Deathfest. The band has also been confirmed for Maryland Deathfest in Baltimore this coming May 26th through the 29th. Stay tuned for more festival announcements.

Multi-state death metal project GRUESOME was born out of guitarist/vocalist Matt Harvey and drummer Gus Rios’ mutual involvement with the Death To All tours. Harvey served as frontman for the original mini-tour and Rios both performed “Baptized In Blood” and worked with DTA drummer Sean Reinert on the following US tour where  Exhumed filled in as support. After discussing and discarding the idea of putting together another incarnation of DTA to focus exclusively on Death’s first two albums, Harvey half-jokingly suggested that the pair write their own songs in intentional homage to the band. It wasn’t long before the idea gained traction, and the band soon had five tracks written. With Harvey writing in California, Rios recruited Possessed guitarist Daniel Gonzalez and Derketa bassist Robin Mazen to record the material in Florida, while Harvey tracked his vocals on the West Coast.

GRUESOME released a pair of single-song demos in 2014, and was subsequently signed by Relapse Records in June of that year, with a full-length release (recorded in Florida, of course) planned for early the following year. The result of those recordings would become the band’s debut full-length Savage Land, a truly harrowing slab of Leprosy-styled death metal released in April 2015. It’s clear from the song quality on Savage Land that GRUESOME is humbly determined to keep Death’s classic sound alive as faithfully as possible, and the critical acclaim for the record has reflected the band’s dedication. Metal Injection called Savage Land, “the advanced, dripping-rot-from-the-corners-of-a-coffin, putrid, vile death metal throwback that you’ve been waiting for,” while Exclaim gushed, “the enthusiasm alone on Savage Land is awe-inspiring.” Now, GRUESOME has returned stronger than ever with their new EP Dimensions Of Horror. With an all-star lineup and unmatched songwriting skills, GRUESOME is willing and able to propel the historical sentiment and sincerity of Death’s spirit into the present.