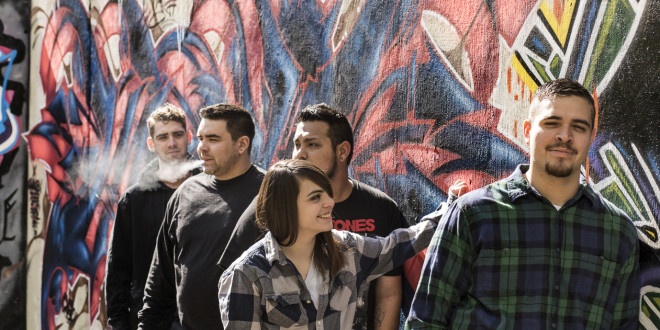 Alternative Rock / Hip Hop band MiltonJ and The Leftovers are looking to make waves in the music world with the release of their lyrically and accoustically stunning album Vain Wisdom, which drops April 15th.  They’ve already revealed the lead single/video, “Killing Dreams,” a direct and well-worded challenge to the music industry structure, and are teasing out another track, “Face of a Stranger,” along with a well answered Q&A, with Music Existence.

To get started, can you tell us about your upcoming album, Vain Wisdom?  Is there a specific theme that fans should listen for?

Vain Wisdom, overall, is definitely a milestone in our music career. It basically stands as a statement on who we are as musicians, what we want to accomplish, what we’ve learned about the industry, and how we’re planning for the future. A lot of time and energy was put into this album as well as reflection on mistakes we’ve made in the past. Even though we’re still young, growing, and learning more about the industry every day, we’ve learned a lot of lessons regarding business ventures and just our naivety about “getting famous”. But more importantly, the music itself is about the ups and downs of life and the struggles one can encounter along the way. We titled it Vain Wisdom because human beings are not perfect. Even the most humble people can be vain in that when they try to speak on their perspective on life, it’s not perfect and it’s not necessarily true to the journey that everyone else is taking. There are, however, many moments in which we can relate to each other and empathize on mistakes we’ve made or situations we’ve experienced and that honesty is what brings people together. And there are many themes and stories to be found within each individual track that help build upon that main theme. It also stands as a foundation for the sound we’ve been trying to create that stays true to us and our influences and we think we’ve finally found something.

Tell us the story behind the name MiltonJ and The Leftovers.

Jose started out as a solo artist/rapper and went by MiltonJ. After becoming friends with Silverio, Garrett, and Eddie/GOOD ‘OL BOY a band was formed and multiple members joined and left the band in the process. Eventually, Eddie decided to fill in on bass and brought his sister Kristina in to play guitar and we all collectively decided that the band name should be extended. Starting out as an inside joke MiltonJ had for a B-side album called “Leftovers”, Garrett, Silverio, Kristina, and Eddie decided to call themselves the Leftovers because everyone loves kitchen leftovers and leftover tracks that aren’t released officially are usually hidden gems that reveal a different side to an artist. So that joke basically evolved into the band name, thus becoming MiltonJ and the Leftovers.

What is one characteristic of each member of MiltonJ and The Leftovers  that you can share with us?

MiltonJ is super business-oriented. Being a business major, he’s usually one step ahead when it comes to endeavours related to that area of the band. That’s a characteristic that’s really important to have because with his background combined with everyone else’s abilities, we’re definitely a team that can’t be messed with and we’ll always be ahead in the game. He’ll also point out opportunities to get us noticed or get our music out there that we’ve never heard of or don’t know much about, so it helps us all learn along the way.

Silverio is the hype-man. Originally, he started out as MiltonJ’s go-to for everything and always stayed at his side when it came to driving to shows, promotion, selling tickets, and just being extremely dependable. When we found out that he could do back-ups and could DJ, he proved to be an invaluable member to the group in that can get the crowd going. He can go from scratching to screaming to backup rapping to singing on stage and he’s very versatile.

Kristina is the ‘tech-y’ of the group. She handles a lot of the computer and audiovisual work of the band behind the scenes. She’s always been musically and technologically inclined, and being  a film major, she knows a lot about doing work with computers and web. That is also something really good to have because a lot of the members don’t understand a lot of computer stuff or don’t have a super creative background. So her experience in her field and passion is extremely beneficial to the band so she can also be a step ahead and relay information to the other members.

Eddie/GOOD ‘OL BOY is really good at talking. He’s really good at speaking clearly, precisely, and long enough to get anyone interested in what he has to say. This helps us out a lot because he encounters a lot of different people all the time and this way he can get our name and our music out there better than the other members through word of mouth. This also makes him really persuasive, so this also brings more opportunities our way as well through working with other promoters for shows or befriending other artists/bands for collabs.

Garrett is very out there. He has a very outwardly aimed personality, which brings more attention to us and our music. There’s also no other drummer out there quite like him, so that also brings a uniqueness factor to our band in that there’s no one out there as outspoken or expressive as him and he channels that through his drumming and the additions/ideas he brings forward to the band.

With your experiences thus far, what about the music industry “grinds your gears”?

You know what really grinds our gears? Artists that mimic other artists or are super generic. When we hear a new track on the radio that sounds exactly like another artist or talks about the same stuff like partying, money, and girls /dudes it gets really redundant. Don’t get us wrong, there are a lot of talented and original artists out there that have made a name for themselves and are getting the recognition they deserve. And who doesn’t love a good party track? But there are also a lot of generic rappers, singers, etc. that only want to get famous and spew out tracks that we’ve already heard before or make a quick buck even though the song doesn’t have any depth to it lyrically or instrument-wise. That’s a lot of what we try to say through our music too: there’s a lot of corruption and greed in the music industry today that just pushes the same image and lyrics through our speakers and we’re expected to like it. And what upsets us the most is that there are artists  out in the world that are left hanging by the wayside or underground musicians that are overlooked because they don’t appeal to some labels enough or that they won’t bring in money. Even though our end goals involve making a steady income through making music, at the end of the day it’s not about the money. Music has always been something that’s important to all of us and that shared passion is what pushes us to keep trying despite all of the times we’ve been told we’re not good enough. We’re not gonna give up that easily.

What is your favorite track that YOU have produced/written/released?

We can all agree that from this album, “Enough” really blew us away. That’s probably our most favorite track off this album because it’s a very different vibe and has a really good message as well. Production-wise, it’s definitely got a hip hop flow to it and little slight things about it in the instrumental that we did that just makes it an experience to really sit and listen to critically. The lyrics talk about how the portrayal of love on TV and in the movies isn’t true to how it is at all. Love is not black and white and it’s not always easy or perfect. And in some situations, love isn’t always enough to make a relationship last. But that doesn’t mean that if it’s not meant to be that one’s failed at love, but rather that it’ll come to you through other ways without you having to go find it. That’s what makes it a beautiful thing because you can always find it through friends, family, your passions or someone new. Real love is found beneath the surface and will never have strings attached to it, as long as each is willing to put forth the effort.

What’s the story behind the track we’re premiering, “Face of a Stranger”?

(MiltonJ) “Face of a Stranger” is another very mellow and melodic track about how over time, people you’ve come to know may walk away from your life. For me, I’ve lost a lot of friends and people have walked out of my life due to mistakes I’ve made, my addictions, and even through trying to make amends and become a better person. I’ve struggled with alcohol over the years and that pushed a lot of people away from me and hurt a lot of the people that I love. That made me decide to stop drinking and become sober, which I’ve been for about 3 or 4 years now. Even recovering from that has pushed friends that I’ve known for years away, and that’s made me realize that not everyone is meant to stay in your life.

We do! Right now we’re working on a campaign for Vain Wisdom and once it drops, we’re gonna do weekend mini-tours to different states to promote it. Starting out small, we plan to head north and play a few shows in Pennsylvania, New York, Connecticut, New Jersey, and surrounding states then towards the end of the summer we’ll head south to Florida for a bigger tour.

When you’re preparing to perform, do you need to psych up or calm down?  How do you do it?

I think we do a bit of both depending on the vibe of the show and how the crowd’s feeling. We tend to get a little more crazy as we get more into our set in order to get the crowd going more regardless of how many bodies are watching us. But if it’s a particularly big crowd and they’re really into us, we definitely have a balance between both. You never wanna go too hard right at the beginning of the set because you’re gonna gas out and the crowd’s gonna lose interest, so it’s good to fluctuate between getting the crowd warmed up, going hard, then mellowing out and then repeating. It keeps things interesting.

We’d say both are pretty important but I think Facebook is more of a priority than Twitter. We have a lot more content and info displayed on our Facebook than on Twitter, and the feedback we get through Facebook is much more responsive. Twitter is good for short and sweet status updates or for helping spread news about us while Facebook is more of the hub of where everything is at. It’s a lot more connected to our friends and fans and gives us better outreach, while Twitter is a more condensed outlet for less serious stuff. We definitely utilize both of them equally though.

What are your top 10 go to albums to relax?

Koi No Yokan by Deftones

When Life Gives You Lemons, You Paint That Shit Gold by Atmosphere

The College Dropout by Kanye West