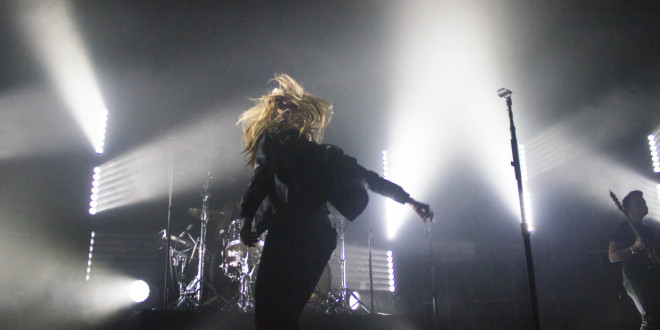 Even outside the venue you could feel the excitement of the fans, the whole line awash with PVRIS shirts, dyed hair and ripped skinny jeans.It was amazing to watch the crowd fill up so quickly for the sold out show. From previous experiences a sold out show in the ABC is always mental, especially one as highly anticipated as this.

The moment Sheffield band Alvarez Kings stepped on stage I already felt like they would be a band I would enjoy, the lead singer dawning a leather jacket and I wasn’t wrong. Their beat started off slow and melodic, then heavily kicked in getting the crowd going, just in that first song. The sheer energy they performed with was astonishing, it was effortless. At one point the guitarist joined the drummer on the drums and it brought an incredible full sound to them.

They took a quick digression to a slower one, scattered phone lights of the crowd in the air. The ABC’s legendary disco ball washing the room in a silver shimmer. Lead singer Simon Thompson made his way to the barrier, right in front of the crowd, passionately putting his everything into their performance, while the rest of the band rocked out on the stage, just radiating a positive energy right the way through to the end of their set where they left the stage, every person in the crowd cheering for the incredible band.

K-Flay had a very unusual sound to her; the singer herself had a strange voice, very similar to the likes of Halsey and Melanie Martinez, not as fitting to the heavy drum and bass going on behind her. There is no doubt that she’s great, just not sure if she was quite my thing. Kristine’s level of energy and enthusiasm was rivalling that of a young puppy, she was all over the stage as she got the crowd involved in a big clap along.

But the one member of the backing band I couldn’t take my eyes off was the drummer, the focus he had was unreal, like it was a precision operation as he played. The way I would describe their sound is a video game sound with a mix of decorative vocals and a little rap thrown it. And the guitarist had no problem showing off his impressive solo skills.

But the moment everyone was there for was the incredible PVRIS and boy were they incredible. Not since Muse have I see quite such an incredible three piece band. It was like that stage was theirs the moment the lights went down. The infamous ‘Here we f@#%ing go’ chat was being screamed by the whole crowd and within the first 5 seconds of ‘Smoke’ lead singer Lynn Gunn made the stage hers. She owned it, she had every person in that crowd with their arms in their air, making them scream, shout and belt out the lyrics. The lighting gave her a heavenly glow as she send shivers down the spine with her powerful voice.

‘St. Patrick‘ brought out the wild in the crowd. Not a single one of them was on the ground, it was absolutely surreal to watch from above, to watch so many bodies move to a beat and the band definitely played up to it, encouraging the jumping, the clapping, the screaming. But what I feel was a very integral part to the stage was the incredible set, suspended behind them was the giant mirror emblem from their ‘White Noise’ album cover.

The images displayed on it were almost a representation of each of the songs.

‘Ghost’ was a beautiful point in the show, where Lynn was left herself on the stage, her and a guitar and I’m pretty certain I teared up. She was so incredible at keeping the crowd in her grasp and captivated. Even more so when they brought the band back onto the stage and the crowd were told to put their phones away as a ‘social experiment’ and it was beautiful, it was beautiful not to see the flashes of iPhones or a sea of bright screens, just having everyone so focused on the band and on the music, it brought up the whole atmosphere.

They left the stage with a powerful number, the lighting show making it all the more dramatic while the crowd went absolutely ear shatteringly loud. The band giving their absolute all, you could tell, the sweat pouring off them all and the crowd. Then it was time for the encore, the chant began again, this time ten times louder, so loud and so rowdy you could feel the floor vibrate with the stomp.

The band came back on, still full of the same energy they left with, finishing with ‘You and I’ and ’My House’. The last one was the song I was most excited for and I wasn’t disappointed. I had the most incredible feeling in my chest when the first few notes of the song started. Watching them give it their all, the passion, the power and the most amazing support from the crowd was the perfect way to end the show. And to top it off, Lynn made her way into the crowd and kept her vocals going effortlessly. I can honestly say PVRIS is a band I would go back and see 100 times over and never get sick of them.