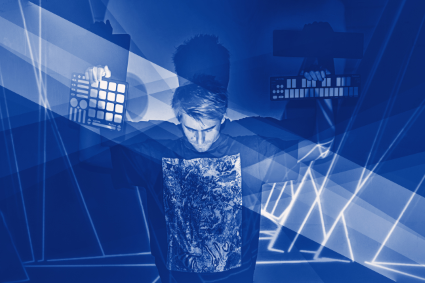 26-year old guitarist/producer Remi Gallego has become fast-known for his innovative electro sound: the best of progressive metal based in all-out computer frenzy. Under the name the Algorithm, Gallego earned a heaping of credibility by way of festival performance (United Kingdom’s Download and Australia’s Big Day Out), and through numerous endorsements from Ableton, Line6 and Bare Knuckle Pickups, just to name a few. How does this all translate onto record? Exactly as you’d imagine—through a healthy discipline centered on experimentation, bass kicks, and blistering riffs.

Galego’s third full-length, Brute Force, is the ideal culmination of said elements. Accordingly, this marks a more guitar-driven contrast from the otherwise dance/EDM-oriented OCTOPUS4. Consider the dominant guitar influence right in the appropriately-titled first track, “boot”. Its entry is downright full—not confined to a mere ‘chip’ or sample-based structure. I liked how the accompanying synth played as if the system was being loaded; the progress bar wheedles its way across as processes are carried out. The underlying percussion also owes much to the album’s conceptual edge, sporadically fluctuating between fuzz laden and bit-crushed feels. Once the speech synthesized ‘Engage brute force attack’ command commenced, I started thinking about a ‘what if’ scenario entailing a virus scanner in action. The solo at around the 1:40 mark is airy—somewhat distant when compared with the bass factor of the kicks, but nonetheless enjoyable. It is a refreshing change of pace, not only for its conventionality, but in eventually opening a new avenue for the metal and guitar influences. Up next is “floating point,” which captures those same elements but in a much more direct and vigorous way. The guitars are better defined here and work alongside the percussion just the same. I began noticing by the first 2 minutes or so in how solid this combination is, as it emanates a kind of cross-over appeal to a crowd in tune with dubstep. This might be the defining moment where two eclectic styles of music effectively mix and create harmony with both crowds. Again we are treated to another well-executed solo that provides a smooth transition to the electronic influences. By that point, the lead melodies are sparse and coated in an interesting distortion texture, making efficient use of variety within the song. The title track is worthy of especial mention, its muffled intro melody resembling that of a handheld Tiger game. When the main melody proceeded to emulate it in a style with greater prominence and high end, I was simply blown away. Before I knew it, my nostalgia senses tingled from a series of multi-dimensional 8-bit-style chords. I couldn’t express how impressed I was during this song’s breakdown, hearing a free-rein metal riff in all of its rawness with electronic tones bubbling under it. The 4:00 mark also had something that threw me through a loop—a death metal inspired rhythm with reverberated electronic melodies fleshing out the sound.

Further on, “userspace” refreshes its pace by starting on a mid-tempo alt rock note. There’s a decent chorusing lead buildup from the song’s electronic melodies, but 1:44 and onward brings out the most of its rock qualities. This time the leads create a shoegaze-laden wall of sound, while the drums are done live for that purpose. The subsequent moment within the rock vein emits an industrial feel, propelled by prominent hi hats and a fuzzy synth layer. Toward the remaining portion of the song, there is an endearing gothic vibe about the reverberated vocals and sparse guitars. “Shellcode” offers a commanding EDM vibe in its synths and beats, giving total focus on how crossover appeal is achieved. Cycling through the profound intricacies of dubstep, hardcore and techno, the extent variety seems limitless and integrated seamlessly. Every point is clearly defined so the listener is prepared which element will take over. No matter which phase is preferred, the song will cause an ultimate combinative sensation of dancing and head banging any which way. The nu metal-venturing “deadlock”, featuring fellow French producer Igorrr, is decidedly short, but full of edge and impact. While it makes use of tempo-based artifacts to the benefit of the song, its placement—toward the end of the album—is a bit strange. It is solid for all it represents, but I just feel that a song with a greeting that introduces listeners to the computer music genre should play earlier on. Though I’d assume it was made to showcase the capabilities of the genre at its heaviest, and I respect that. The tenth and final track, “trojans (hard more)” is particularly noteworthy, not only in its multi-genre showcase, but in its portrayal of a computer virus on the move. From its trap phase of analysis to its breakbeat multiplying phase, the instrumentation directly works into its progression of the virus. I felt that the abrasive, abrupt mix of styles starting at the 3:08 mark symbolize the extent of file damage the virus inflicts. As the end of the song approaches, it’s as if the virus has made its way into System32, causing all processes to cease functionality for good.

Overall, Brute Force oversees Gallego’s seasoned artistry as a producer and musician. Besides having a clearly high-end display of metal, there are plenty of equally crafted ambient breaks and builds to supplement the atmosphere. In good time, each track will entice a greater spectrum of listeners into the root of musical cyberspace. For every instance of cunning malware or euphoria-inducing detours, there is a surplus of productivity and drive toward a new challenge.

Check out the video for “pointers”:

I come from a family who is passionate about all things music. I learned to sing at an early age, and by 13, had my very own Fender Strat guitar. I tried my hardest at learning all that I could. Because I was born with cerebral palsy, I had to teach myself an adaptive playing style. I learned to write and record my own music, despite these difficulties. In college, I started making great use of my writing abilities by reviewing music, as well as copy editing. I guess it's best to stick with what you know, while welcoming a fair challenge at the same time.
Previous Good Charlotte, Yellowcard, Papa Roach, BABYMETAL and Beartooth to Perform at the 2016 APMAS
Next Jason Stetson – Leave it All to the Earth