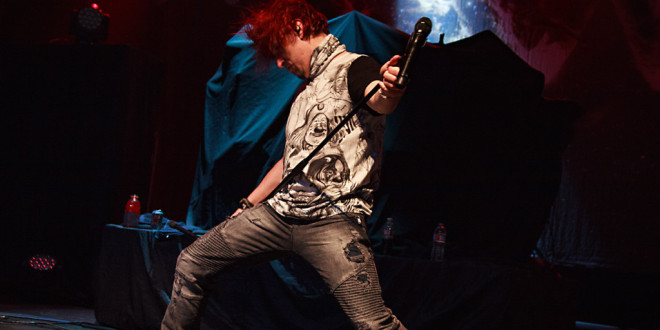 Finnish melodic metal powerhouse, Sonata Arctica bid farewell to North America this past Sunday with a performance at Stage 48 in New York City.

Sonata Arctica first came overseas for a jam-packed, 26-date tour across the United States and Canada as direct support for symphonic metal leaders and fellow Finns, Nightwish. Dutch symphonic band, Delain rounded out the group. An electric buzz floated around the room the tour’s opening night at the Starland Ballroom in New Jersey (pictures available here), as attendees hung on vocalist, Tony Kakko’s every word—their energetic fist pumps a testament to their devotion.

Following the trek’s end on March 23rd, Sonata Arctica embarked on an eight-date headlining tour, which is what brought them to New York on this chilly Sunday night. While Stage 48 was not nearly as packed as the Starland Ballroom performance, fans still seemed to carry equal excitement. Clouded in a smoky haze courtesy of the overhead fog machine, a myriad of faces could be seen reflected in the room’s massive disco ball. A lively light show danced across concertgoers young, old, and in-between; those who donned high heels or combat boots; and individuals whose familiarity with local acts pegged them as an integral cog in the NYC metal machine.

ShadowStrike
While their clothing initially made them look like sound techs, Long Island’s ShadowStrike opened the show with a face-melting blend of power metal. Still sparsely populated inside, those that were there drew near as the band took them on a cosmic journey guided by alternating tempos and striking solos across longer pieces.

Unfortunately, microphone issues made it difficult to hear lead vocalist/guitarist, Matt Krais, although the backing vocals were intense. With Krais tucked in the downstage left corner, it was a little difficult to know at first who was singing or even where to look as each band member stayed relatively still throughout the set. While a tad disconcerting, this minimalist approach to performing really let the music shine through and served as a fitting beginning to a night headlined by a band whose background melodies often share center stage with their vocals.

Gothic Knights
Next up was NYC’s own Gothic Knights, who seemed to breathe renewed energy into the crowd with their fast-paced set of dark-tinged epic power metal. Easily the most charismatic performer of the night, Dark Knights’ new vocalist, Gabriel Colon took on larger than life status as he rocked his mane of black, curly hair to and fro, and emphasized audience participation throughout the performance.

While struggling with the same mic issues that plagued ShadowStrike—which continued despite several requests to turn his mic up—Colon’s voice was exceptionally powerful and fitting for the pounding music, especially when hitting higher notes. Clothed all in black, except for guitarist Dave the 3rd (who rocked a Spiderman compression shirt), the group looked the part of dark knights on the prowl to steal souls with their dark music.

Sonata Arctica
The crowd was antsy following Gothic Knights’ crushing set, some of which was drawn out by a long intermission. However, the energy returned quickly once Sonata Arctica took the stage with Pariah’s Child’s opening track, “The Wolves Die Young.” Tommy Portino (drums) and Henrik Klingenburg (keyboards) were exceptionally lively, despite being on instruments that tend to take the back stage during live performances. When not singing, Kakko himself also raced around the stage, jumping at key moments with the audience, and enthusiastically playing air guitar with the mic stand next to bassist, Pasi Kauppinen and guitarist, Elias Viljanen.

While newer songs went over well, excitement intensified during songs from Ecliptica, as fans shouted “(run away, run away, run away)” during “FullMoon” and sang ballads like “Letter to Dana” and “Replica” word for word. These songs also were the beginning of a pit whose ringleader’s leather vest, bandana, and primal walk around the floor signaled he was there for one thing only—to mosh. This advanced to crowd surfing later in the evening, with one fan successfully making it to and from the stage and another receiving a high-five from Kakko, along with several cringe-worthy plummets to the cold, cement floor.

In a way, it seemed as though the crowd stole Sonata Arctica’s energy partway through the performance, as Kakko and his band mates seemed to get stiff for varying intervals throughout the set. Nevertheless, the band was able to come back for a powerful encore before Kakko sincerely thanked fans for attending and ending the tour with him.