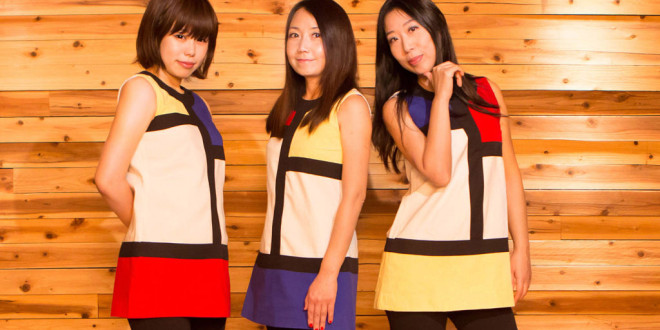 Since 1981 Japan’s Shonen Knife have been entertaining crowds worldwide, touring with acts such as Nirvana. On April 1, 2015 the trio released their 16th studio album Adventure and fans of the band will not be let down with their latest creation.

The album opens with the leading single “Jump Into the New World,” and it’s easy to see why this was picked to headline the LP because it is full of a high energy pop/rock feel. It’s the type of song that will immediately make listeners want to get on their feet, dance and sing along. Impossible not to smile when this tune is played, this infectious track has everything Shonen Knife fans will gobble up. There are shades of the 60s here, playing up the girl group aspect, but it also sounds very modern. With a rocking electric guitar solo in the middle, “Jump Into the New World,” literally has everything a fine and well produced pop song should have and will leave listeners feeling happy.

“Dog Fight” has much more a midtempo, jangly Beatles feel to it with some nice harmonizations. This is a theme that listeners will hear time and time again on Adventure, but it never tires itself as it is done so well. One might expect the song about a dog fight that includes the words “bow wow wow” in the chorus to feel a bit cheesy, and while the lyrics are not the most sophisticated, they don’t need to be because Shonen Knife have enough charm to sing about just about anything and still have their audience fall under their spell.

The contrast in the darker, moodier instrumental opening of “Green Tangerine” against the sunny lead vocals of Naoko adds a welcome layer of complexity to an otherwise simple song. It is very surreal and is reminiscent of the peace and love vibes that the decades of the 60s and 70s had. There is also a very commercial appeal to this song, in its sweet nature and pretty harmonizations which make the track something that any generation will be able to enjoy. In just under four minutes, it’s the type of tune that like so many Shonen Knife songs will get stuck in listeners heads long after it is done playing.

The ultimate highlight of the album is “Hawaii,” in which Naoko sings about wanting to visit the tropical state and paints a vivid picture of what she would do there. The instrumentals themselves have a Hawaiian vibe to them, which help to sell the concept of the song, but it is really the lyrics which will have listeners wanting to go to Hawaii too . It’s vivid and colorful,l just like the band itself, and is entirely infectious right from the start. The layering of voices is well placed and as Naoko sings about riding on a sea turtle, it brings The Beatles “Octopus Garden” vibes to mind. It’s playful and highly enjoyable from beginning to end and leaves listeners on a high note.

The entire record is pretty solid, but there are a few misfires towards the end of the LP. “Tasmanian Devil” starts off with a lush, darker “House of the Rising Sun” tone, with Naoko delivering her finest vocals, deep and intriguing on the verses, but it feels disjointed from the rest of the track which has an attack attitude. It almost feels like one is listening to two different songs as the contrast here doesn’t fit. On the positive side there’s nothing quite like this on the entire album, so if one is inclined for something different from Shonen Knife “Tasmanian Devil” is the song for you. “Cotton Candy” which closes out Adventure also suffers from a disjoint. What is mostly a dream pop slice of Heaven is interrupted by jerky vocals during some portions of the song which immediately takes listeners out of the original psychedelic feeling.

Considering Shonen Knife are celebrating 35 years, they should feel very proud about their work on Adventure. Whether you like pop, rock, or punk there is surely something here for you and no matter if you’ve been a fan for a while or are just discovering the trio for the first time there is no denying that the album will satisfy listeners no matter how long they have known the band.