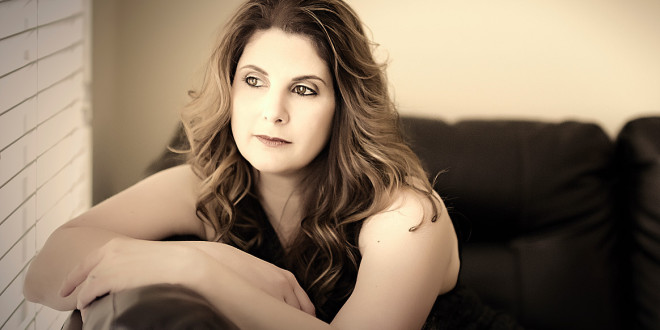 Corinne Cook’s recent album, Dressed Up For Goodbye, serves up doses of heartbreak in all its different hues, from the sorrow at the end of a relationship, to the indecisiveness when you’re in love with a friend. While there are one or two tracks thrown in that aren’t entirely focused on relationships, for the most part, the songs stay true to the theme heralded by the title of the album.

The album opens with Little Miss Understanding, which, while not the strongest opening, is still catchy in its lyrics. The song has distinct pop influences, and personally, I found a lack of harmony between the background track and the vocals. The two tracks that follow, Who and Dressed Up For Goodbye(the title track), explore the immediate reactions to an ending relationship. Who signifies the bewilderment of the one who’s still holding on, the singer’s crooning “Who…” towards the end of the chorus the very epitome of confused longing. Dressed Up for Goodbye, on the other hand, acknowledges the dignity we try to hold on to as we draw close to the end. The track has a beautiful opening, great instrumental, and is the first good song in the album. Long Before Goodbye, which comes later in the album, is distinctively country, and emanates a sense of acceptance after all the upheaval.

Dirty Little Secret is on a similar vindictive vein as Little Miss Understanding, but is markedly better than the latter. The opening itself is… tangy, the lyrics sharp, and Cook’s vocals dripping with country sass and confidence.

He Loves Her Like Crazy is to me, a study in contradictions. The entire track is all over the place – slow and quiet in parts, loud and jangly in parts, clean crisp vocals in part, and in part excessive crooning. It’s like it can’t make up its mind what it wants to be. However, the lyrics of this track are haunting in their deceptive niceness, characteristic of an abusive relationship, and in that way, maybe all the aforementioned dithering makes sense. Lord Have Mercyhas a similar theme, with slight Carrie Underwood vibes to it. Where He Loves Her Like Crazy falters, Lord Have Mercy has powerful vocals and a catchy riff. The title might throw one off a bit, but the song itself fits right in.

I Don’t is a song of impressions and quiet glimpses that is captivating in its simplicity. The song will resonate with anyone who’s ever been in love with a friend. Cook’s and Paul Scott’s voices mesh together wonderfully, husky and sweet in parts. The lyrics – “Playful laughter, familiar friends”, “Subtle glances, careful eyes”, capture the mental advance and retreat of the relationship so well. The band version of the song feels like it has slightly too much going on in it. It’s no longer a quiet ballad, but comes across as just another pop production. Fall Apart has a predictable melody, and yet, it is powerful and cathartic in its utter rawness. In my opinion, the best of Cook’s vocals are brought out in this song. Turning off the World is empowering with its take-charge, upbeat vibe. Probably the only upbeat, energizing song in the lot, it’s a refreshing break from the angst ridden earlier tracks. Cowboy, for some reason, sounds dearly familiar. While not new or genius, its sweet vocals and part-melancholy, part-cautionary lyrics are somehow endearing.

Dressed Up For Goodbye is consistent in its theme, but yoyos around a little with the genre, given the distinct pop vibes that come off it. This might not necessarily be a bad thing, except Cook does so much better with simply country. Overall, with the strong lyrics and the sometimes unique instrumentals, it is clear that Cook is someone with real stuff.