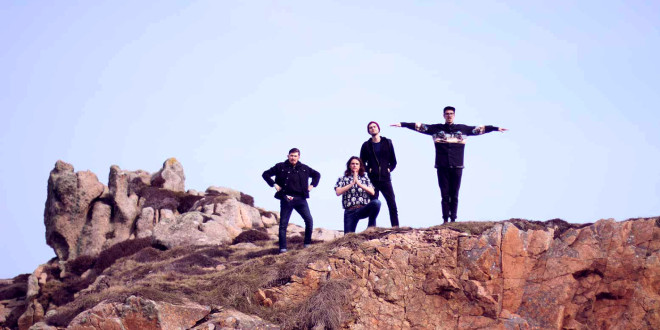 London’s cosmic punk quartet WACO are hugely excited to announce their brand new EP URPISE. The four piece, hailing from the weirder nooks of the UK (North Yorkshire, Jersey and Coventry), came together through their animalistic compulsion to make noise and their perverted goal to get inside peoples heads, like squatters in an empty condo.

Unabashedly melting 70’s rock influences with punk, hardcore and garage, UPRISE is as loud and urgent, as it is crafted and honest. The release is set for June 10th, this summer via Venn Records.

Alongside the announcement of UPRISE, they’re also debuting their blistering new single and video, SE17and have been confirmed as main support’s for both Juliette Lewis & The Licks’ and The Dirty Nil’s European Tours this April, and also as main support to The King Blues in May! Fresh from supporting Slaves last year, WACO are fast becoming known for their frenetic and entrancing live show, collecting heads and hearts wherever they play. Since their conception they’ve also graced stages with Muskets,The Hell and Blackhole, and the diverse list continues to grow.

“‘UPRISE‘ is a hopeful record for hopeless people. It is our lifebuoy to the lost and downtrodden, whether you’re tattooed with a dodgy past and want to change, or muzzled by life and need to shout. This record is a celebration of our miraculous, fleeting human existence. Join us.” WACO