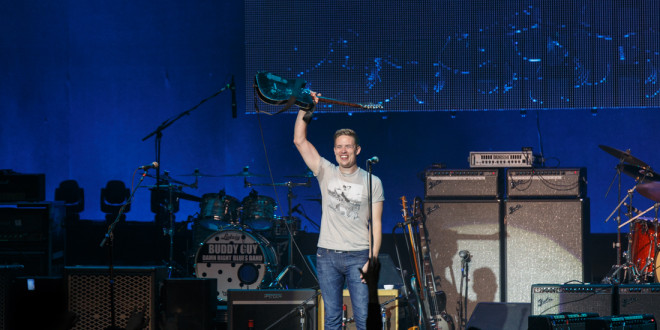 The Hendrix Experience Tour made a stop last week at the Count Basie Theater in Red Bank, New Jersey. The Count Basie will never be the same after it was graced by these amazing, world class artists. If you are not familiar with the Experience Hendrix tour, it ranks among the best of the best when it comes to an all-star tour. It’s a one of a kind tribute tour, running now for over 12 years.

This year’s tour lineup consisted of Billy Cox, Buddy Guy, Zakk Wylde, Kenny Wayne Shepherd, Jonny Lang, Dweezil Zappa and Eric Johnson to name a few. These fine musicians take turns performing classic Hendrix tunes together, bringing his music back to life. You’ll be hanging onto the edge of your seat, as you’ll never know what to expect next. The highlight of this year’s tour was Zakk Wylde playing lead guitar on Little Wing. Each night of the tour, Zakk made his way down into the audience and planted himself in the crowd. Fans loved this part of the show and I found it to be breathtaking to witness live.

Each Hendrix Experience tour has it’s own unique lineup, with several musicians changing each run. However, the legendary Billy Cox is normally on the bass. If you’re a Hendrix fan, you do know that Billy Cox is the only living member of Hendrix’s original band. At the age of 74, he is sharper than ever and sounds fantastic. Even though the spring tour has just come to an end, watch out for the fall tour. You won’t want to miss this history in the making.

For more information on the Experience Hendrix Tour:

Resident Music and Photography addict from Northern, New Jersey.. USA. Got into both music and photography at a young age.. it's been history since!
@billtnj
Previous Gallery: Alvarez Kings at The Wonder Bar in Asbury Park, NJ – 03.25.16
Next Sick Bird’s new album ‘Endangered Species’