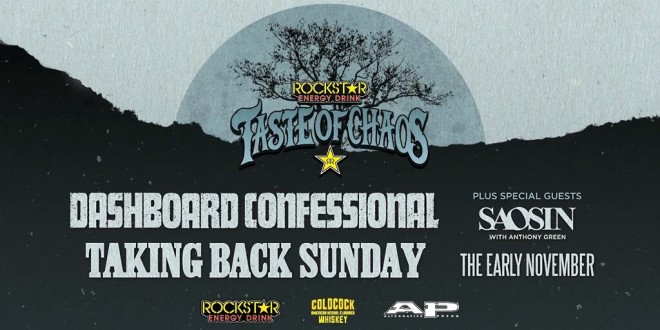 For the second year in a row, the Rockstar Energy Drink Taste Of Chaos will return to San Bernardino, CA for its annual, day-long destination festival. After a five year break, last year marked the festival’s return to Southern California, with over 13,000in attendance for the all-day event. Taking place on Saturday, July 16 at the San Manuel Amphitheater Festival Grounds, the festival continues to honor the indie-alternative scene’s most influential acts, while debuting its next rising stars. Providing attendees a fun day in the sun and the chance to sing along to their favorite anthems, this year’s Rockstar Energy Drink Taste Of Chaos Festival promises once again that it is not an event to be missed.

The extraordinary lineup for Rockstar Energy Drink Taste Of Chaos 2016–produced by SGE, 4Fini and Live Nation–includes Dashboard Confessional,Taking Back Sunday, Quicksand, The Get Up Kids, The Starting Line, Saosin(fronted by original vocalist Anthony Green), Senses Fail, The Early November,The Anniversary, Hot Rod Circuit, and Reggie and the Full Effect, with more information to be announced.

Taking Back Sunday collectively adds, “…it’s going to be good to be back in the company of so many bands we are both friends with and fans of.”

All tickets for the Rockstar Energy Drink Taste Of Chaos Festival are General Admission open seating, and go on sale Friday, April 1 at 10:00 AM PT atwww.festival.tasteofchaos.com. There will be an extremely limited amount of early bird general admission tickets starting at only $25.  The regular on-sale price will be $42.50. Prices do not include ticket service fees or parking.

A VIP ticketing option will also be available for $199 which includes admission, a fast lane entrance into the festival, a VIP laminate with lanyard, and access to the VIP Lounge (located near the main stage), which will have complimentary select beers, Rockstar Energy Drinks, snacks (while supplies last), private restrooms, comfortable areas to sit and relax, a dedicated cash bar, and access to the Rockstar Energy Drink Taste Of Chaos step-and-repeat logo wall with a photo booth.  Attendees must be 21+ to get into the VIP Lounge.

In addition to the astounding lineup on multiple stages, the Rockstar Energy Drink Taste Of Chaos Festival will include food trucks, craft beer, carnival rides, a vendor village and more.  An extremely limited quantity of on-site camping spots will also be available for purchase on May 9, with more information at www.festival.tasteofchaos.com.

Taste Of Chaos co-founder Kevin Lyman of 4Fini says, “After seeing the success of last year’s Taste Of Chaos, it was clear that there was a demand for the festival’s return. We’re excited to be able to bring this expanded music lineup to the Southern California show.”

Co-founder John Reese of SGE adds, “Since the festival is also the last stop on theRockstar Energy Drink Taste Of Chaos tour, we see it as a huge end of tour party that will be a really special day for the bands and everyone that attends.”

Originally launched in 2005 by Vans Warped Tour founder Kevin Lyman and John Reese (co-founder of Rockstar Energy Drink Mayhem Festival, founder of Oddball Festival), Taste Of Chaos started as an international touring festival, playing over twenty countries around the world, and helped to launch the careers of bands like Thirty Seconds To Mars, Paramore, My Chemical Romance, The Used, Story Of The Year and more.

For the most up-to-date information, please visit:

Previous Cage The Elephant at The Main St Armory in Rochester, NY 03/26/16
Next Gallery: We The Kings, Brighton Music Hall 3/25/16