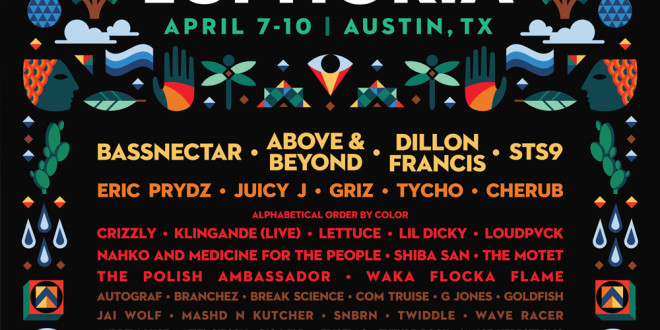 EUPHORIA MUSIC FESTIVAL LINEUP WITH BASSNECTAR, ABOVE & BEYOND, DILLON FRANCIS AND MORE

Austin, Texas – Through the chaos that inevitably comes at the end of each year, Euphoria kept moving forward by announcing several major artists and headliners this past December for the fifth anniversary festival, including: Bassnectar; Above & Beyond; Dillon Francis; STS9; GriZ; Juicy J; and Tycho. Starting fresh in 2016, Euphoria is back and announcing its full lineup of performers slated for the highly anticipated festival this April 7th-10th in Austin, Texas. After much fan speculation, special guests Eric Prydz, who’s debut studio album, Opus, drops February 5th and electro-indie duo, Cherub joins previously announced headliners.

This year, Euphoria will be opening the gates a day early to allow campers to get settled in and stake claim on their home for the next four days. With this added day comes the Thursday night New Moon Pre-Party in celebration of the first phase of the Euphoria family’s return back to Carson Creek Ranch. The New Moon Pre-Party will be exclusive to all four-day campers and will feature a special set by The Polish Ambassador.

“We are excited to get the Euphoria Family back home and in the gates a day early,” says festival producer Mitch Morales. “I couldn’t think of a better way to kick off the weekend than with the New Moon Pre-Party.”

Conveniently located just minutes from Downtown Austin, the multi-stage music and camping festival will return to Carson Creek Ranch on the banks of the Colorado River and offer world-class visuals, unique stage designs, artist workshops, interactive experiential installations, enhanced camping option and much more. General Admission passes are available now for $139, plus fees. Camping options, which includes a new Thursday night New Moon Pre-Party, are available starting at $199, plus fees. Multiple VIP packages with preferred viewing areas, private bars, VIP restrooms and showers, concierge service, luggage drop off and bell-hop services, and express entrance are available starting at $229 (without camping) and $324 (with camping). Early bird ticket purchasers can upgrade to VIP for $120 or include a camping add-on for $65. Tickets are available online at www.euphoriafest.com. Euphoria Music Festival is an 18 and over event.

Euphoria Music Festival is produced by Vivid Sound Entertainment. Visit www.euphoriafest.com for the most up-to-date information. Stay connected on Twitter at www.twitter.com/EuphoriaMusFest and on Facebook at www.facebook.com/EuphoriaFest.

Being behind a camera has been a passion for myself since 2002 when I first started developing my own film as he honed my skills initially in a darkroom environment, and eventually transitioned into the digital world. I am photographer with a unique vision capturing life in its most priceless moments. The ability to captivate life behind the lens is truly exciting. My work ethic & unmatched drive for success makes me a true artist. I will stop at nothing to share my talent with the world and make sure everything I shoots becomes timeless.
@http://twitter.com/ArchAngelPhoto
Previous Album Review. Kelly Oliver: Bedlam
Next Bear Hands at The Main St Armory in Rochester, NY 03/26/16