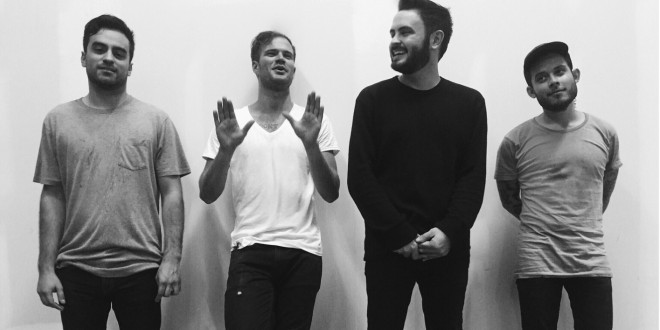 Can’t Swim is a rock quartet originating from New Jersey with a newly- released EP, Death Deserves a Name. The band was founded in spring of 2015 by guitarist and vocalist Chris “Krier” Loporto who has been a drummer for several bands throughout his musical career. While experimenting as a songwriter he sent out some material to his friends asking for some feedback. Having liked what they heard, drummer Danny Rico, guitarist Mike Sanchez, and bassist Greg McDevitt, joined Loporto and became Can’t Swim. They signed with Pure Noise Records in December of 2015. The new EP features 5 tracks that venture in the versatile realm of alt-pop-rock.

‘Your Clothes’ is the first song from the EP and has amazing bass and drum hooks, which reel you in for a ride that is similar to the Crazy Mouse Rollercoaster. The composition sounds somewhat chaotic as it is fast, quiet, strong, loud, and aggressive all packed into a 2 minute and 19 second song. But it’s precisely the off-the-wall nature of the track that keeps you pressing repeat.

‘Come Home’, ‘Right Choice’, and ‘Way It Was’ are all heavily influenced by pop-punk stylings with their rhythm patterns, guitar breaks and drums. Loporto keeps a similar range in his vocal delivery on all three of these tracks. Sanchez, Rico, and McDevitt maintain precision and uniform quality throughout the entirety of the songs.

The final track is ‘Death Deserves A Name’ and shows a new spectrum to the band’s musical capabilities both as songwriters and musicians. The bass is toned down allowing for brighter guitar melodies to contrast the drums and Loporto’s broader vocal range. He is able to transfer the title track to other levels of emotion with his passionate delivery at the end, the pain is palpable in every syllable. Closing the EP with this track leaves the listener wanting more.