Home / Album Reviews / So Does Your Mother – “Neighbours” 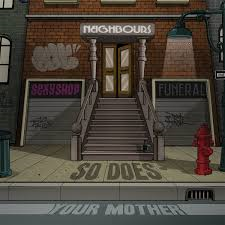 So Does Your Mother – “Neighbours”

So Does Your Mother – “Neighbours”

If you’re looking for a bit of crazy for your life, look no further – So Does Your Mother is here to entertain you with their beautiful mix of dance and progressive rock, with a splash of avant garde. They get their inspiration from giants like Frank Zappa and King Crimson (the latter days), however you should lend your ear to So Does Your Mother, if you’re a fan of artists like Mike Patton (not his work in Faith No More, but his stranger side projects like Mr. Bungle and Mondo Cane), George Clinton, Gentle Giant and Daft Punk. This talented band was created in 2009 in the “eternal city” of Rome. The people behind the project changed through the years, but in 2013 So Does Your Mother’s first EP came out – “Fac(e)ing the Animals”.
“Neighbours”, their first album, came out on the 20th of June 2015 and was followed by a European tour to promote it. The people behind this record include Marco Molteni (producing, editing and mixing, Mordecai Recording Studio), Michele Mancinelli (comping) and Claudio Gruer (mastering, Pisi Mastering Studio). Due to their Italian background, So Does Your Mother also needed a pronunciation specialist – James Waites. The album was recorded by John the Illuminati at Trafalgar Recording Studio and Simone Empler at Blue Trip Studio. The album artwork was created by the famous street artist Mr. Thoms. Some famous guest have also left their mark on “Neighbours” – Ike Willis (Frank Zappa’s guitarist) is the voice of the Danalger’s Manager on M.D. and Ghita Casadei does the Soprano part from Under the Roof.

But who are the musicians behind So Does Your Mother? The line up varies from 6 up to 10 people. Lorenzo Sidoti is the engine in the band – other than playing guitar he creates the music and lyrics. The rest of the team are Gian Maria Camponeschi (bass), Vladimiro Sbacco (keyboards & synth), Alessio Zappa (drums), Carmine Di Lauro (sax), Letizia Lenzi (clarinet), Francesco Antonini (flute), Domitilla Masi (vocals), Francesca Faraglia (vocals), Maria Onori (vocals).

“Neighbours” is named after the feeling you get, when entering a neighborhood in the spring or summer – every window is open to reveal a person’s life, a puzzle piece in the grand picture of the neighborhood. So Does Your Mother want to be our neighbors – engulfing us in their energy, music and passion, whether we like it or not. When you listen to this beautiful album, keep in mind there’ll be some strange elements. Some of my favorite pieces of the album include Red Leaf (a rock piece with groovy bass-lines, as well as a little nod to the theme song of “Ghostbusters”); Your Mother (you can hear the influence from Daft Punk in this gorgeous piece) and Modern Seducer (my love for this crazy song stems from the same part of my heart, where I keep Mr. Bungle and Kraftwerk). Keep in mind that “Neighbours” is not an album you can play as background music – you need to listen carefully, in order to understand the complex figures and appreciate them. So give So Does Your Mother the time from your day they deserve and I promise you won’t regret it!