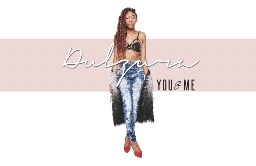 Talented teenage vocalist, Enkenye Reels from Atlanta, GA is making her debut as Dulzura: The Queen after being discovered by industry executive and producer, Cordero “Dero” Minnis in 2015. The pair have worked to develop a sound for Dulzura that will intrigue your ears and is quickly gaining positive feedback. You can now enjoy her uniquely soft and raspy vocals on her newly released debut single, You & Me produced by Dero which is currently available on Google Play, Amazon, KKBox, and several hundred other outlets across over 120 countries worldwide. The artist kicked off the first quarter of 2016 by inking a global distribution deal with rising and extremely effective distribution and entertainment service provider, Uniscope Distribution & Brand Services and the company released her hit single on Monday, March 14, 2016. The artist is currently in the studio finalizing her upcoming EP, Respect which will be releasing worldwide very soon.

Stephen Vicino is the founder of MusicExistence.com. He created this site to give talented musicians a voice and a way to be discovered.
@@svicino
Previous Once Upon a Dead Man Debut “Rush” Music Video
Next D.A.R.K. (featuring members of The Smiths, The Cranberries) Release Debut Album on March 27th