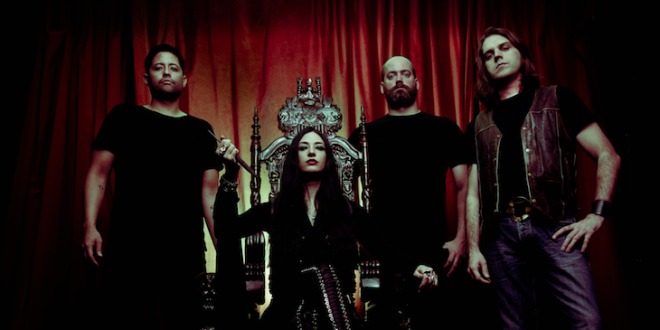 Inspired by the pagan holiday Saturnalia, Blood Ceremony’s fourth album Lord of Misrule (released March 25th by Rise Above Records) resurrects the Roman celebration in all of its long-forgotten glory. Not only does the album breathe new life into this piece of ancient history, but it also guides listeners down a torch lit path through the gluttonous feasts in which the terms “master” and “slave” no longer exist. The accompanying rush of feelings climaxes as the Lord of Misrule’s—i.e., the Master of Ceremonies—throat is slit, each pump of his crimson blood an echo to the band’s resounding drumbeats.

Comprised of Alia O’Brien (vocalist/flautist/organist), Sean Kennedy (guitarist), Lucas Gadke (bassist), and Michael Carrillo (drummer); Blood Ceremony is a Canadian band with an interesting mix of doom metal and progressive rock, sounding very much like Black Sabbath’s psychedelic love child. In addition to standing as a refreshing contrast to today’s mainstream rock, Blood Ceremony incorporates more avant-garde (in terms of metal) instruments like the flute and organ that make sense with the group’s sound to the point where they could each easily stand in as a guitar.

The album opens with “The Devil’s Widow,” a seven-minute song that hooks listeners in with the haunting strumming of a guitar before leading into a flute-accompanied crescendo topped by O’Brien’s commanding vocals. The chorus itself is incredibly catchy and nigh near impossible not to sway along to, despite the complicated layers of shifting tempos, riffs, and vocal tones.

“Loreley,” the second track, marks an immediate change of pace as its upbeat background and gliding vocals paint a picturesque and deceptively peaceful scene. Think of the poppies field moment in The Wizard of Oz.

It’s hard to point to a specific standout track on the album, as each song could theoretically stand on its own but also grows more complete when listened to as a whole. For instance, the opening riff on “The Rogue’s Lot” (track three) channels Black Sabbath’s song, “Iron Man” before brilliantly descending into fast-paced, flute-filled madness, while the way O’Brien’s voice croons over the choruses in the following tracks, “Lord of Misrule” and “Half Moon Street,” is utterly enchanting.

If fault need be found, it ultimately lies in the fact that it does take several listens to become enthralled with the music, although this is easy to ignore once fully immersed in the music. In addition, the last track, “Things Present, Things Past” does drag on a bit more than expected, making the bittersweet end to a fantastic album all the more depressing.

All in all, Lord of Misrule will make a great addition to any collection that likes a side of vocal and compositional complexity with their metal.