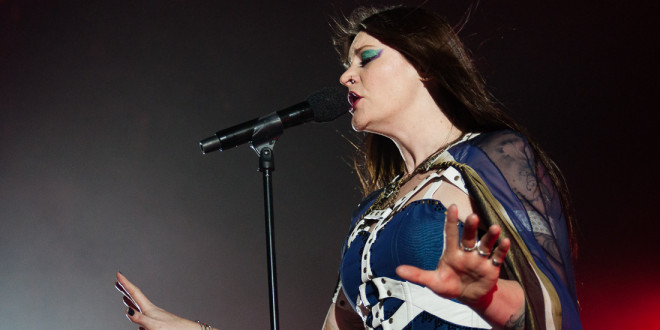 Three of the most respected acts in symphonic Euro-metal – female-fronted Dutch act Delain, long-lived Finnish power quintet Sonata Arctica, and the symphonic metal pioneers themselves, Nightwish – have made their way across the pond to tour the states, promising a night of headbanging with a touch of epic fantasy. This review will cover the March 16th show at the Uptown Theater in Kansas City, MO.

Delain began as an alternate project of Martijn Westerholt, former keyboardist for important symphonic metal band Within Temptation. With their first album released in 2006, the band has been steadily gaining widespread popularity – largely as a more pop/rock oriented version of tour-mates Nightwish. The band proved this immediately upon taking the stage to their new single “Suckerpunch”, which was effective in showcasing the many aspects of the band’s sound, from the driving metal rhythms and guitars, to Westerholt’s sweeping orchestral and electronic textures.

All of this, however, seemed merely a vehicle through which to present the absolutely dazzling vocals of frontwoman Charlotte Wessels, whose voice – full and rich, but smooth as velvet – pierced through the thick guitar and keyboard layers with impressive clarity. Wessels had obviously caught the audience’s attention, as they responded very warmly after each of the band’s eight songs – the majority of which were taken from 2012’s popular We Are the Others album. Closing with the captivating vocal hook of the same album’s final track, “Not Enough”, Delain had set quite a high standard for the remaining acts to follow.

Visit Delain and order their new EP Lunar Prelude at their website here.

Acting as direct support to Nightwish were fellow Finns Sonata Arctica, whose eight-album career began in 1999, and who have been travelling the globe consistently since then, bringing a dynamic power metal-infused show with them. Opening with “The Wolves Die Young” from their most recent album Pariah’s Child, the band then threw back to their seminal debut album Ecliptica with the hit “My Land”, and the Iron Maiden-meets-keytar werewolf epic, “Fullmoon”.

Vocalist Tony Kakko proved to be quite the engaging frontman, both during and between songs. When not singing in his polished tenor wail, Kakko was still sweating it out with his bandmates – gesturing to the audience, dashing across the stage, and wildly twirling the mic stand while lone guitarist Elias Viljanen and key master Henrik Klingenberg battled it out with satisfyingly melodic solos. After Kakko expressed his gratitude to concert patrons and led them in a self-deprecating chant of “shut the **** up, Tony”, the band closed with the sensational anthem “Don’t Say a Word” and their signature ode to “Vodka”.

Finally, headliners Nightwish appeared on stage to great fanfare after an introductory recording from their latest album Endless Forms Most Beautiful. Their eighth studio album marks a new chapter in the band’s storied 20-year career as one of the most influential groups in the symphonic metal genre, and as one of Finland’s biggest metal acts of all time. Endless Forms is the first Nightwish album recorded with new vocalist Floor Jansen, who is most known for her work with the bands After Forever and Ayreon. This tour will be the first time many North American fans will have the opportunity to experience Jansen-fronted Nightwish after the departure of previous vocalist Anette Olzon.

Unfortunately, the beginning of the band’s set was unsettlingly turbulent. Opening officially with “Shudder Before the Beautiful” from their most recent album, the mood quickly became slightly sour, with bassist Marco Hietala – visibly frustrated with something – tossing his instrument to the ground and walking off stage. The band handled the unexpected behavior professionally, though, finishing the opener and continuing through the next song bass-less, while stage hands were seen shuffling equipment back and forth behind the drum riser. After the second song, the entire band left the stage briefly before Jansen re-appeared to inform the audience of the technical problems, and that the show would resume briefly. The recess lasted about ten minutes before the entire band re-took the stage, with Hietala hefting a seemingly cumbersome double-neck bass/guitar combo – presumably forced to use his single-song instrument as a backup for the entire set. After wrapping up the next song, “Ever Dream”, Hietala approached his microphone and humbly apologized to the audience for the trouble, and promised that he would continue the set without any further interruptions – a promise which, to his credit, was completely fulfilled by the end of the evening.

Shrugging off the difficulty and soldiering forward, the band proceeded to enthrall the audience with renewed vigor, whisking concert goers away on one fantastic voyage after another. Specific praise is due to Jansen, whose absolutely sublime vocals completely stole the show – especially during hits such as the uilleann pipes-driven “Élan” and the soaring and operatic “Nemo”. As a contrast to the pleasantly saccharine voice of the aforementioned Delain frontwoman, Jansen’s more classical style of singing meshed perfectly with the bombastic orchestral swaths the band is known for – all of this culminating in perfection with the ten-minute epic “Ghost Love Score”, which saw Jansen reaching awe-inspiring heights to the wild cheers of the audience. The 16-song set was rounded out with “The Greatest Show on Earth”, which proved to be the perfect punctuation to a night of satisfying cinematic might which only such European marvels as the bands on this tour can truly provide.

Visit Nightwish and order the latest album at their website here.