Home / Interview / Interview with Blackey Lor of Midnight Mob: “The fact that I front a rock band is truly God’s sense of humor”. 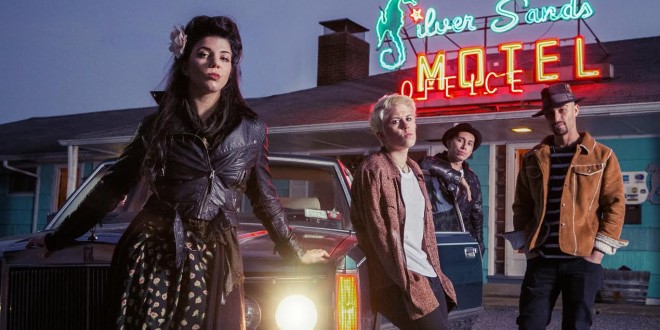 Interview with Blackey Lor of Midnight Mob: “The fact that I front a rock band is truly God’s sense of humor”.

New York City’s Midnight Mob has kept their music just like the environment around them—gritty, diversely expressive, and true-to-heart. Their reputation for building solid performance rapport, as well as genuinely unified communication with fans over their half-a-decade career has been rightfully earned. Both the band and fans are stoked about the release of their Honest Brutal Glorious EP, which hits stores this Friday, March 25th. In preparation, I caught up with the band’s vocalist, Blackey Lor. She was keen on candidly discussing her experience performing, musical influences, and perhaps most bold of all, humbly accepting fate through a puzzling music industry.

ME: Describe your initial experience in a performance setting at a young age. Was that moment essential in fueling your desire to be in a band, even before the Mob was a thing?

Blackey: The fact that I front a rock band is truly God’s sense of humor. I had horrible stage fright. The first time I was on stage I may have been seven or eight for a Church Christmas play. I wasn’t a strong reader so they gave me four words to say. It wasn’t so scary practicing it in Sunday school though, but I’d get the most bizarre anticipation anxiety leading up to my lines. Day of the show I got so freaked out that the place was packed and I hid behind a door and sobbed. The pastor carried me on stage to say my four words while freaking out and I never did anything like that again. First time I sang in front of Mickey Squeeze, I cried and the first few times we played shows I puked my brains out.

ME: Having been Midnight Mob for nearly seven years now, what methods have you used to effectively stay on the same page with one another?

Blackey: Take a big ol’ piece of humble pie. Humility, truly believing in what you’re doing, gratitude, and taking the idea of quitting off the table unless its moral will take you very far. In all situations ask yourself what you can do better if my band mates are pissed about something. Being with these guys really taught me everything on how to have a relationship. I’m kind of the spacey “mom” of the band so I try to get everyone to communicate and be diplomatic…I definitely wasn’t always like that. You just got to keep focused on the common goal and the strengths you each bring to the table.

ME: On each of your releases, there always seems to be nuances of punk, blues and metal bubbling underneath the hard rock shell. Have you ever experimented with different feels before ultimately deciding how a song should sound?

Blackey: In a way. Sometimes we’ll talk about a song or sound we’re particularly into for the moment but in general, one of us brings a few riffs to the jam room and we go from there. Depending on how the drums are sounding and how it affects the gang sets the tone. We will experiment with it for a while till it feels “right”. I know for “Song for the Damned,” Carly & Squeeze were hell bent on getting reggae in somewhere on the EP and then the bridge in this song cried out for it. We listen to lots of different music and it keeps us stimulated and creative.

ME: Which musical influences have you worn proudly on your sleeve, and still managed to give the Midnight Mob treatment?

Blackey: I think what keeps it fresh is that blend of a few different genres. We all kind of bring the energy and emotion of a love for a specific genre or two. I really love Etta James, Ray Charles, BB King, Sam Cooke, Janis Joplin, and John Forgery. I think that mixed with all of the music I grew up with in church and 90s grunge I instinctively channel that when I open my mouth to attempt to jam out a sound. We are trying to be more conscious of our hook, arrangements and better song writing in general but that’s kind of it. Our van CD player will be rocking, on any given day, Motörhead to early 90’s hip hop to Ryan Adams. When we’re mixing all of this stuff, we’re self aware on how our songs may come off but at the same time we won’t release anything that doesn’t feel like it came from anyone else other than us. We put out there what comes out of us at that given moment.

ME: Your live shows have been known to consist of two main elements: fun and high energy. How has your experience been in transferring the live aesthetic into the recording studio, especially from album to album?

Blackey: I’d say we’ve been able to capture it more and more with every EP we’ve put out. Most of us came into this not really knowing how to play our instruments or ever performed before. The more we trusted our instrument and our ability, the easier the emotion would flow out of us. For many years we got used to playing dive bars and we got used to not having great sound and a whirl wind of technical difficulties so we learned early on, if the show was going to go down, we’d go down together in a blaze of glory. f the audience couldn’t hear super clearly what we we’re trying to say, we’d make them feel it through our energy and what they saw. A big part of our recordings is capturing a live performance energy from stumbling through a pick slide to breaking a stick during a fill. If it sounded awesome and in the moment, it’s fair game even though not perfect. A majority of the guitars, bass and vocals are put together during the actual recording or improvised in someway. In “Ghosts,” there’s a quick guitar lick going into the final choruses. Squeeze did that while just playing what he felt during the recording. It was never pre-arranged or even thought about. It just came out one time and one time only and it stayed.

ME: In the last ten years or so, the place in the mainstream for rock has been all but forgotten. At the same time, there are only three major labels left today; yet here you are—undaunted, kicking ass, and stronger than ever in spite of this. Would you go major if given the opportunity?

Blackey: It would depend. Of course we’d love having money behind us so we could do this full time and it’s hard to get any radio action without hundreds of thousands of dollars, but we really want to maintain our artistic integrity. If a label really believed in us and didn’t want to change us or our message, we would be open to it. Morally there are things that aren’t up for compromise. We had majors come down for us a few years ago with a developmental deal on the way to the table, but everything went south. Everything happens for a reason.

ME: Speaking of which, the central concept of the new Honest Brutal Glorious EP involves keeping a fighting flame roaring amidst deterring circumstances. As long as the support from fans is present, does that suffice in helping your flame stay lit?

Blackey: Absolutely! We love playing our music and spreading out message and as long as we can physically and financially do it we will. During our really bad time beginning in 2013 we still had fans reaching out offering support. We’d be lying if we’d say that support didn’t have a huge impact on us to push harder. This EP would not have seen the light of day of we didn’t get their support.

ME: On your native NYC soil, do you often—sometimes unexpectedly—find fans who have supported the Mob since day one?

Blackey: For sure! One of the greatest memories of this was playing this show at R Bar in NYC. We walk into the venue talking to people figuring out the situation and then all of sudden over the speakers we hear our old demoed song “Say it Ain’t So” playing through the bar. I thought to myself who has this and who would actually play it? This song is probably the 1st song we ever wrote and demoed. At our earliest shows we sold it on a burnt CD with other demos, but after that it just remained on our hard drive. The DJ that night happened to be at one of our earliest shows, loved the cd, and when we walked in cranked it up. That was really cool.

ME: Some bands have claimed to be “people’s” bands, although they’d only go as far as to provide content with broad lyrics, and are actually as far away from those people in every other aspect. Given your active communication with fans—whether online or at shows, does that term hold meaning for you in any way?

Blackey: Of course. When I think people’s bands, I think more of our presence at shows. We love to play, we love supporting and rocking out with other bands we play with and we genuinely enjoy learning about the people that are coming out to support local music not just us. I think our genuine friendliness and outgoingness really sets us apart from a lot of other bands out there. The best part it comes from the four of us. There isn’t a single member that people point to as the jerk one or the arrogant one. When people come to our shows, we want it to be more of a ‘come to our party’ and ‘let’s hang out’ kind of vibe.

ME: Anything else you’d like to say to the Music Existence readers, fans, and the rest of the world?

Blackey: Keep on expressing yourself and support the arts. There’s so much out there right in your backyard. Go to the local watering hole when some original bands are playing bring a few friends and enjoy yourselves. Even if the bands are not so amazing I can guarantee you that you’ll meet some new friends at that show that will enlighten your world with something new.

For all things Midnight Mob related, head over to www.MidnightMob.com, iTunes & Spotify!

I come from a family who is passionate about all things music. I learned to sing at an early age, and by 13, had my very own Fender Strat guitar. I tried my hardest at learning all that I could. Because I was born with cerebral palsy, I had to teach myself an adaptive playing style. I learned to write and record my own music, despite these difficulties. In college, I started making great use of my writing abilities by reviewing music, as well as copy editing. I guess it's best to stick with what you know, while welcoming a fair challenge at the same time.
Previous Beyond the Stars
Next I, Ohms Streams Debut EP