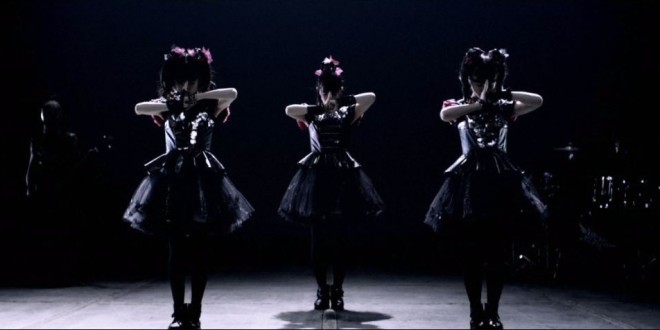 BABYMETAL—2015‘s breakout all-girl-fronted Japanese heavy metal/teen-pop hybrid group–partnered exclusively with Music Choice (3/18) for the world premiere of the official music video for their lead single “KARATE,” from the group’s forthcoming sophomore album METAL RESISTANCE, out April 1 (also known as the “FOX DAY”) on RAL/Sony Music Entertainment (in the U.S.).

“KARATE” was performed for the first time last year at Yokohama Arena in Japan and features the call out phrase “Seiya, soiya,“ with a stirring chorus and melody sure to resonate with fans. Currently at Active Rock Radio, the single is available now as an instant grat track when METAL RESISTANCE is pre-ordered on iTunes. It is also streaming now on Spotify. In addition, METAL RESISTANCE is available now to pre-order via BABYMETAL‘s webstore as a standalone CD and special pre-order bundles.

BABYMETAL—the young trio of 17-year-old SU-METAL (Vocal, Dance) and 16-year-olds YUIMETAL (Scream, Dance) and MOAMETAL (Scream, Dance), backed by a four-piece band packing a heavy metal arsenal–have been nominated in the “Best International Band” category at the 2016 Alternative Press Music Awards, being held in Columbus, OH on July 18. Fans can cast their vote at altpress.com/apmas.

BABYMETAL will support the new album on their “Babymetal World Tour 2016”with a U.S. run of dates kicking off May 4 at Playstation Theater in New York and making stops in Detroit (5/11), Chicago (5/13), San Francisco (7/14) and Los Angeles (7/15), among other cities. Click here for a complete list of tour dates and tickets.