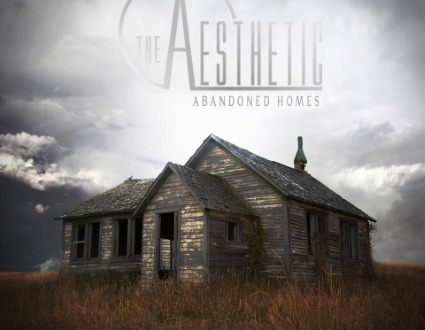 Alternative rockers, The Aesthetic, have truly hit the nail on the head with their debut EP Abandoned Homes, released on March 4. The EP features the band’s first single, “Come Home To Me,” serving as the finale. The album although consisting of five tracks, brings to life the narrative of a broken home as if it were a full length piece.

The entire album is intriguing, with a unique sounding vocalist complimenting the constantly genre-swapping instrumentals. Some similarities can be attributed in comparison with Chiodo’s Craig Owens. Both he and The Aesthetic vocalist, Michael Neil, have emotional, riveting high pitch vocals that convey their lyrics powerful meanings extremely clear and well.

The EP opens up with the first track, “Ten Thousand Screens.” This track throws you right into the mix, ardent lyrics with a nearly equivalent passionate voice wrap around whomever is listening and pull them into the narrative that is Abandoned Homes. With lyrics such as Dear God, I’m screaming/Can you hear me?/Can you feel me?/Do you even care? it is beyond clear that the rest of the album is going to be nothing but saturated with content heavy lyrics. The track is skillfully produced, the fading out right at the end causing a haunting feeling.

The following track is “A Harlot’s Mouth” and consists of a completely different sound. However, this isn’t a bad decision. The track sounded more like The Aesthetic’s alternative rock roots rather than the metalcore felt in “Ten Thousand Screens.”

“We the People” is the third track on the EP, bringing the narrative back to its metalcore beginnings. This fact however does not deter the track away from its powerful lyrics revolving around being and feeling like a monster.

As if the band had done it on purpose, the next track “Full Circle” ironically brings back the EP to alternative rock. The lyrics cleverly relate back to “Ten Thousand Screens,” with lines I can’t explain/My mind is ten thousand TV screens/But am I to blame for whats wrong with me?

The grand finale, “Come Home To Me” wraps the narrative up incredible well. Without a doubt, the last track is the most emotional, riveting song of the album. Not only lyrically, but vocally and instrumentally as well. Each of these three factors come together to formulate a bitter, heart-wrenching finale for Abandoned Homes.

All in all, The Aesthetic’s Abandoned Homes deserves a four out of five stars.