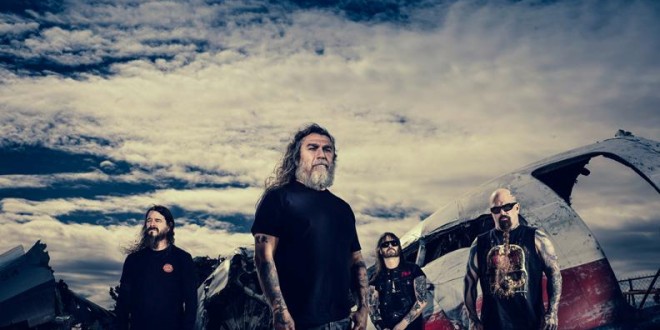 New Slayer Debuts Music Video – “You Against You”

In Slayer’s song “You Against You,” vocalist Tom Araya screams “Your perfect world is ending this day, So what? I wouldn’t have it any other way.”  And so, from the very first frame of the band’s “You Against You” music video, the gore, the violence, the projectile-blood-spewing and the carnage begins and just never ends.

“You Against You” is the prequel to “Repentless,” Slayer’s brutal 2015 video filmed at an L.A. prison that has logged nearly 7.5 million YouTube views.  Like “Repentless,” “You Against You” was directed by BJ McDonnell, stars Jason Trost (“Hatchet III”) as Wyatt, the eyepatched rebel inmate, and tells the story of the circumstances that led to Wyatt’s erroneous arrest and imprisonment.

Slayer’s performance of “You Against You” was shot deep in the heart of California’s Mojave desert earlier this year in a graveyard of jets, airliners, and helicopters.

Repentless, Slayer’s 12th studio album, was released on 9/11/15, making its career-highest debut on Billboard’s Top 200 Albums chart, coming in at #4 and scanning 50,000 units.  The album also debuted in the Top 5 in the U.S., Germany, the Netherlands, Australia, Canada, Finland, Switzerland, Belgium, Denmark, Portugal, Czech, Greece and Sweden, and was the #2 best-selling album in the world on the United World Chart.  In addition, Repentless received spectacular press response – “Metal Album of the Year” (Guitar World), “…prime fu**ing Slayer…” (Metal Hammer), “…thrash redefined, upgraded and reborn, a return to the essence of who Slayer is.” (Houston Press)

Slayer is currently in the final weeks of its winter 2016 North American tour with Testament and Carcass supporting.  Remaining dates are below.

Tags Music Video north american tour Slayer You Against You