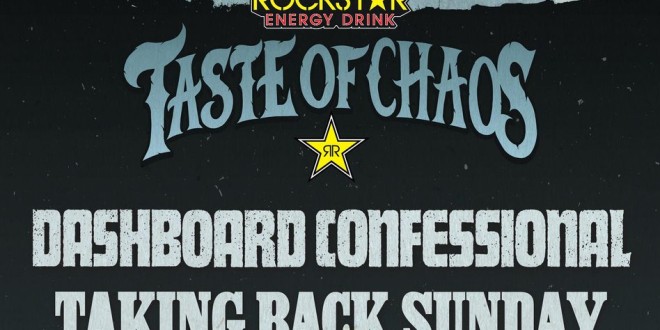 The Rockstar Energy Drink Taste of Chaos Tour Returns in 2016

For the first time since 2009, the Rockstar Energy Drink Presents Taste of Chaos tour is back.  The tour will kick off on June 3rd in Chicago, IL and wrap on July 16th in San Bernardino, CA – featuring Dashboard Confessional with Taking Back Sunday plus special guests Saosin with Anthony Green and The Early November.  Additional special guests in include one-night only performances by Saves The Day (6/17 – Holmdel, NJ), Motion City Soundtrack (6/18 – Wantagh, NY) and The Starting Line (6/19 – Philadelphia, PA).

This summer marks the return to the road for the Taste of Chaos tour and features some of alternative rock’s defining acts.   The Early November and Saosin with Anthony Green will kick off an evening full of alt rock favorites at tour stops, followed by Taking Back Sunday who are currently beginning work on their seventh studio album.  Dashboard Confessional closes the evening with the unmistakable sounds and charismatic stage presence of Chris Carrabba.

Originally launched in 2005 by Warped Tour founder Kevin Lyman and John Reese (co-founder of Mayhem Festival, Oddball Festival), Rockstar Taste Of Chaos went on to hit 20 countries around the world over its five-year run, helping to launch the careers of bands like Thirty Seconds To Mars, Paramore, My Chemical Romance, Chiodos, Saosin and more, while highlighting such fan favorites as The Used, Deftones, Avenged Sevenfold, Rise Against, Thrice, Story of The Year and Taking Back Sunday.

About the 2016 tour re-launch, Kevin Lyman says, “It has been awhile, but I had always hoped that the Rockstar Taste of Chaos tour had a chance to come back.  That time is now, and I am excited that the artists thought it was time too.”

John Reese adds, “After the very successful Taste of Chaos destination festival in San Bernardino, CA in October 2015, we felt that we wanted to bring a number of those amazing bands around the country.”