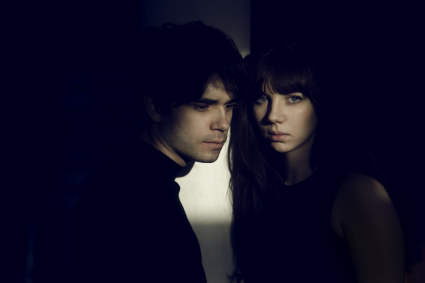 Album Review: The KVB – Of Desire

Since 2010, The KVB has fueled their efforts into a presentation worthy of turning heads and tickling hearts. All that Nicolas Wood and Kat Day project to listeners plays misty and mysterious, yet reveals a blunt honesty—so dreamlike, and yet so achingly real. Their dark new wave aesthetics have consistently sufficed in achieving something both familiar and creative. But this time the band has reached a stylistic milestone; that is, having crafted an enormous, near-panoramic sound.

Take that factor into especial consideration when listening to their newest album, Of Desire. KVBs instrumental elements—the alluring synths, hooky digi-drums, and spacious guitars—are boosted in equal light and are easy to shift focus to. There is already a lot to experience in the initial minute and 20 seconds of “White Walls,” which rings bittersweet like a newly sober Joy Division meets Slowdive. Vocalist Nicolas Wood is empathetic in his lyrical delivery, understanding the newfound social barriers that arise in the midst of a tolling misunderstanding. Even so, such conflict doesn’t come without hope for a resolution, which the tremolo guitar emulates throughout. I liked how the tremolo carried over “Night Games” while keeping the influences intact. The chorusing effect on the guitar feels smooth, taking on the textural persona of being vigilant and on the move. Subtle lead melodies give the track a nice sense of pace, and their transition into a solo exhibits an interesting calm to balance the pressure-pounding nature of the lyrics. Whereas this track was utilized in an uncanny Ian Curtis vein, the following track, “Lower Depths,” is remarkably shoegaze driven. True to its name, its slower tempo allows the listener to hone closely in on the extent of its qualities. The guitars feel quite big, but still leave enough room for the drum beat to stay prominent. With each octave harmony by Wood and Day, I felt my goose bumps somehow coming alive across my neck and shoulders—that is a direct result of the careful production style, as well as the duo’s sincere homage to their influences.

From the middle part of the album, I felt a real sense of fun—more or less an ease of creative expression. “Never Enough”’s hook in was apparent right in its jittery synth, complemented by a suave swing rhythm. Lyrically I could again relate to the song in the sense of relationships: the most clarifying pleas for forgiveness to the other person are rendered insufficient, despite being totally vulnerable. The attention to detail in describing such an occurrence is done without downplaying its connection to listeners, and I can respect that. On the latter side of the album, “V11393” has kind of a blunt industrial vibe to it, altering the stylistic landscape while maintaining focus at the same time. It is one of my favorites besides their carrier single, “In Deep,” both equally poignant and somehow having an algorithmic pacing in their structure. The final track, “Second Encounter,” wraps up the album with a sly sophistication that feels surprisingly subdued. The sliding guitars exhibit a similar quality to Wood’s voice, emphasizing not only its blending with the rest of the instrumentation, but its means of bringing out the two elements together.

Overall, Of Desire felt well worth the listen considering what the band has accomplished. The KVB are one of those bands that use production as a tool—beyond merely beefing up a presentation, and more so to create an engaging, uplifting, and ultimately soul-purifying experience. For that, good quality headphones are strongly recommended for total immersion. I understand that the album has only been out for just a few days, but it truly feels like it should catch on already with millions. Cheers to one major success after another!

More info on the KVB:

Check out the video for “In Deep”:

I come from a family who is passionate about all things music. I learned to sing at an early age, and by 13, had my very own Fender Strat guitar. I tried my hardest at learning all that I could. Because I was born with cerebral palsy, I had to teach myself an adaptive playing style. I learned to write and record my own music, despite these difficulties. In college, I started making great use of my writing abilities by reviewing music, as well as copy editing. I guess it's best to stick with what you know, while welcoming a fair challenge at the same time.
Previous Finish Ticket at Old Rock House in St. Louis, MO on 3.8.16
Next Awaken The Shadow Release “The Hunter” Lyric Video