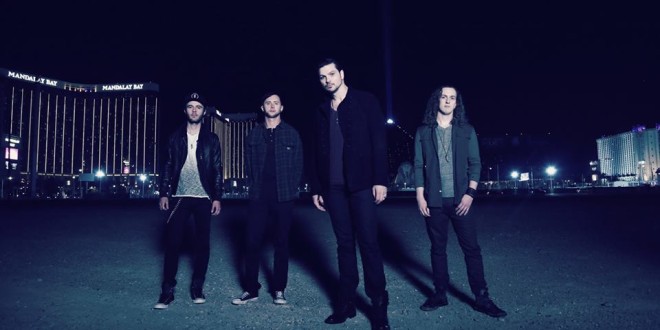 If you’re looking for the perfect soundtrack for your wild night out on the town, hard rock band Adelitas Way has gone independent for the release of their newest album, Getaway. Available now through The Vegas Syn and The Fuel Music, this collection of 11 tracks is full of raw energy, encouraging you to be the life of the party.

Adelitas Way formed in 2006 in Las Vegas, Nevada. They’ve had a few changes in their line-up since their debut, with current members Rick DeJesus on vocals, Robert Zakaryan on guitar, Andrew Cushing on bass, and Trevor “Tre” Stafford on drums. The band saw a quick rise in the mainstream rock scene with their debut single, “Invincible,” which had numerous television appearances in commercials and live sporting events. Since then, Adelitas Way has released four albums (Getaway included) and toured with some of the biggest names in hard rock, including Alter Bridge, Papa Roach, Halestorm, and veteran rockers Guns N’ Roses.

The critically acclaimed single “Bad Reputation” is a brilliant start to Getaway. Featuring deep, heavy riffs and punching drums, this song about shamelessly living your life comes across as a sexy rebellion against society’s conformist mentality. Zakaryan’s wailing guitar during the bridge is a perfect touch to this number and feels like an act of letting go of your reservations.

To keep the party going, “Get Away” effortlessly carries the same energy with frantic guitars and DeJesus’ anxious vocals singing about the need to flee from all the crap of life and to just have a good time.

Zakaryan’s bluesy guitar opens “The Good Die Young” and it quickly gives way to a harder edge. This emotional song features a sudden, darker shift in tone, weaving a story of how hard it is to convince someone not to throw their life away. The quiet bridge allows you to “close your eyes and dream of home” as a way to help you find the strength you need to keep living.

The fast-paced “Low” maintains the same hard, dark theme, as DeJesus pleads to understand the sort of verbal antagonism that can take you down to the bottom of yourself. This song is best suited for a high-speed drive, cranked at top volume so Cushing’s bass rumbles your bones.

“Put You In Place” opens with a soft guitar styling that will trick the listener into thinking this might be a ballad, but it quickly transitions into some truly heavy, angry riffs combined with Stafford’s powerful drums to make this a dangerous and volatile track. DeJesus does not contain the rage as he growls about mercilessly putting someone in their place after they’ve tried to hold him back.

Getting back to the good times with catchy lyrics and a beat that’s easy to groove to, “I Get Around” is a shameless number about promiscuity and owning up to it.

“Filthy Heart” returns to the blues-influenced guitar riffs with a hard rock edge in this angry and bitter song about being in a depreciative relationship. Zakaryan’s guitars shift between grungy and wailing effortlessly and lend even more emotion to DeJesus’ vocals as he shifts between being quietly reflective and vehemently declaring “I always wanted to say it, you’re such a bitch.” Even though I enjoy the overall composition, I feel as though the guitar solo on this one is a bit out of place.

“Go and have her for you” warns DeJesus as “Harbor The Fugitive” opens with a sort of modern outlaw vibe in the melody. This regretful track conveys the resignation of being heart-broken and the pity for the next fool to fall in love with the same fugitive of love. While the guitar solo is a high point for the song, the lyrics do get a bit repetitive for the remaining minute and a half.

By this point, you may be asking “where did the sexy party go?” It’s right here in “Sometimes You’re Meant To Get Used.” This track about a one-night stand is wild, fun, and may just leave you feeling more than a little dirty.

The mid-tempo “Shame” brings to mind the same mental imagery as The Police‘s “Roxanne” — a sultry woman (prostitute or serial lover, you decide), red lights, and red silk sheets. DeJesus’ echoing vocals and the melody give this song an overall lazy sex feel.

Driving drums and fast-paced riffs open up Getaway‘s closing track “Deserve This.” The entire band seems to come together for a one final push to break through the walls. Every part of this song, from the low-end melody to DeJesus’ somewhat threatening insinuations, is soaked in bitterness to make this a perfect wrap to an incredibly solid album.

Getaway is a sinful delight full of infectious party tunes and sexy romps with the occasional deep cut thrown in to bring us back down to earth. This album is best suited for high volumes, road trips, and wild outings. Be sure to pick up your copy at Best Buy stores, iTunes, or Amazon. If you’re new to Adelitas Way, check out their previous work, including the fan-favorite Home School Valedictorian, over on Spotify.