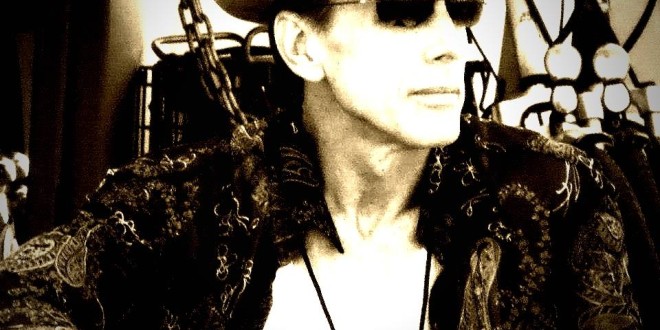 Formerly the front man of the Dance Hall Pimps, RJ Comer redefines his musical style with a stripped down version of Americana Rock. RJ released his new single “Nightly Suicide” on February 26th with an accompanying music video due out March 7th. This is first single off of his upcoming EP also named, Nightly Suicide and will be released on March 25th. The metaphorical title track is RJ’s homage to Charles Bukowski—the poet laureate of barflies. The song also illustrates RJ’s early life, which he describes as “a lot of heavy drinking and nightly self-destruction.” Comer’s gritty, soulful vocals and dark riffs authentically convey the stark and sometimes surreal lyrics and imagery of the song.

The music video is inspired by Bukowski’s screenplay Barfly. Marcos Tinez plays the younger RJ, a lonesome alcoholic who is wearing the identical hat RJ is wearing in other clips of the music video to connect past and present. Directed by Guillermo Rodriguez, “Nightly Suicide” was filmed in Granada, Spain and at Los Angeles’s legendary music venue, The Mint. The soon-to-be released EP Nightly Suicide will be available for presale on March 11th.

Nightly Suicide is a good little number to kick off the RJ Comer EP release. It’s a big sounding track that rocks and swings along with the best of today’s Americana music. I don’t know how it compares to his past work, but this doesn’t defeat its purpose. In-fact it’s is right on the money as it aims for what it is and nails it across the board. Some songs are dramatic like the piece song about Charles Bukowski, which is no secret but must be described nevertheless. This is a very sultry tale that also pertains to Comers life as well. Perhaps that is how the magic of it all, as a perfect number comes from it.

Everything speaks for itself with comprehensive lyrics that don’t go beyond the typical message here, so anyone who’s been there can also relate this to themselves. It’s best to write about characters other than yourself, but it works both ways here without a rare subject matter to back it. If you like blues you will like this, as well. This is no hard country rock, it’s more AOR for the masses. Tom Petty meets Johnny Cash here. It’s almost as if they could’ve written this track. It goes a long way in saying how mainstream it is. There isn’t a thing to dislike about it unless you have no country or Americana, let alone the blues, pop or soul music in you. Those are hard qualities not to somehow live down. I think the song speaks for itself and the video is a good way to help it get the message across without being too graphic or leaning too hard on who it is actually about. Excellent slide guitar leads the show into a killer groove.

The video production is very good in keeping with the values of the song. You can watch it many times and relate to it, not even knowing who it is about as it manages to cross over well that way, like any good song. It takes place on the, a hotel and the bar, giving the essence of what it’s all about. Alcohol, sex and the whole picture come together for a good plug on every level. One complaint if I had any would be that the song is too short. It’s a groove you don’t want to lose. But it takes nothing away from an otherwise cool thing. You don’t have to get too deeply into it to like the song or the video. All of the players put in an equally balanced effort that is mixed with precision.

If this means the entire forthcoming EP is anything like Nightly Suicide, it should be a fine release. There is no dogging anything about this. It seems to have a well-aimed audience and out to please it. There is no denying that from one listen and/or viewing of this. You’ll be wanting more, as long as this is your thing. It works the gamut if so, and it has my interest so I recommend it. I was skeptical at first because I thought this was a single release only and not a lead to the EP. But that was quickly rectified for an edited review. This is right up the alley of any Americana lovers but it also has other more traditional appeal.

This is all very cleverly accomplished with solid results for a maximum product and great pitch for it as it makes its way to shelves. Why EP’s are so popular these days I will never know. Some claim budget, some claim not enough time to make full time efforts in the studio match live performance efforts. But whatever it is, sometimes you take what you can get, and sometimes you pass. This is an EP worth looking forward to because of the lead effort put forth to present it with the right steps, and this video is proof they are onto something. It could be big, but that is yet to be seen. Either way it sounds big enough to when any musical appetite.